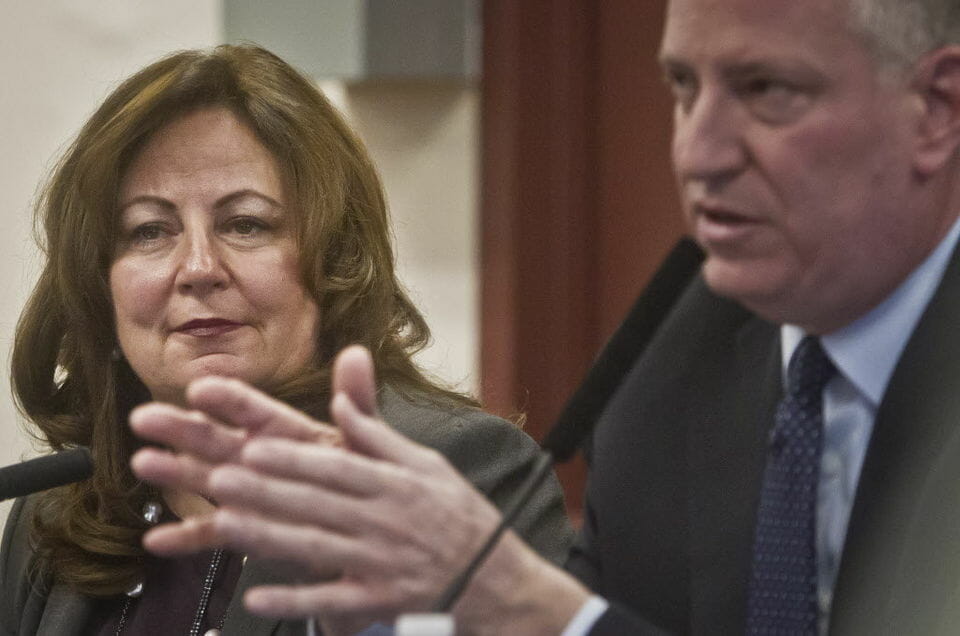 “This is a whole different philosophy,” Ms. Horowitz told the Advance. “This is how we’re going to support these schools so that they can become successful and remain the hubs of the community that they’re in.”

Ms. Horowitz will serve as the new executive superintendent for the School Renewal Program announced by de Blasio last fall. Officials said Schools Chancellor Carmen Farina named Ms. Horowitz because of her background on Staten Island and as superintendent for 14 renewal schools, work which began when the program launched last year.

“She’s been at the front lines,” de Blasio said. “She knows what it takes.”

The appointment comes at a decisive moment for de Blasio, who faces criticism of the Renewal Schools plan from pro-charter school advocates, as well as a proposed state takeover of failing schools.

The mayor on Tuesday again rebuked Gov. Andrew Cuomo’s suggestion that the state take control of underperforming schools or school districts. He has asked that mayoral control of the city school system, which needs to be renewed every few years, be made permanent.

“We will turn these schools around,” de Blasio said, adding that the schools will be closed should the city fail. “It does not make sense for the state to play any additional role.”

Instructional time was added to 54 schools as part of the Renewal Program. Curriculums and course offerings have also been overhauled and officials have shaken up leadership at the schools.

Staten Island is the only borough without a school in the program. But Ms. Horowitz said her time there will still help her in her new position.

“Although it is different areas of the city some of the demographics are not so vastly different from all of our Staten Island schools,” she said.

Ms. Horowitz, a Brooklyn resident and native, began her career in city schools as a social studies teacher at Edward R. Murrow High School. She was a teacher at the Brooklyn school between 1995 and 1999 before serving as an assistant principal of social studies there for seven years.

In 2006, Ms. Horowitz became the founding principal of College of Staten Island High School for International Studies. During her tenure, the school’s graduation rate rate was above 95 percent, according to the mayor’s office.

“Being on Staten Island and the opportunity to create my own school and develop a really strong team that believed that all students can learn is exactly the kind of team we are developing for Renewal Schools,” she said of her experience at CSI High School.

“We’re using some of the strategies that we’ve seen used on Staten Island,” she said.

The renewal programs are tailored for each school, but they are focused on more class time, leadership, professional development, accountability and other support services. Each school is required to meet performance targets based on its own specific plan. And they will all be turned into community schools with extra services to the support social, emotional, physical and academic needs of students.

Port Richmond High School and P.S. 78 in Stapleton were among the first 45 community schools launched under the de Blasio administration last year.

Ms. Horowitz is generally well liked on Staten Island by parents, the high school principals she supervises and elected officials.

Citing her local experience, Borough President James Oddo said in a statement on Tuesday that she “has been a strong force for Staten Island’s educational community.” South Shore Councilman Vincent Ignizio tweeted that she was “a real pro.”

“We have come to know her as an effective, ‘true-grit’ leader who will be a true change agent for the Department of Education’s Renewal School initiative,” Oddo said.

Ms. Horowitz’ current annual salary is $163,000. She is expected to be full-time soon, but she will continue to oversee both borough high schools and 14 renewal schools during the transition.

No interim superintendent for Staten island high schools or those renewal schools has been named yet.

Ms. Horowitz said she will be a somewhat “bummed” not to work as closely with her Staten Island principals. She’s been making the commute from Brooklyn over the Verrazano-Narrows Bridge for years and said she’d still return to the borough in her new job.

“Staten Island will continue to be a wonderful resource for me,” she said.

This article by Anna Sanders is © 2015 SILive.com and the Staten Island Advance where it first appeared March 10, 2015.  It is reprinted here with permission.