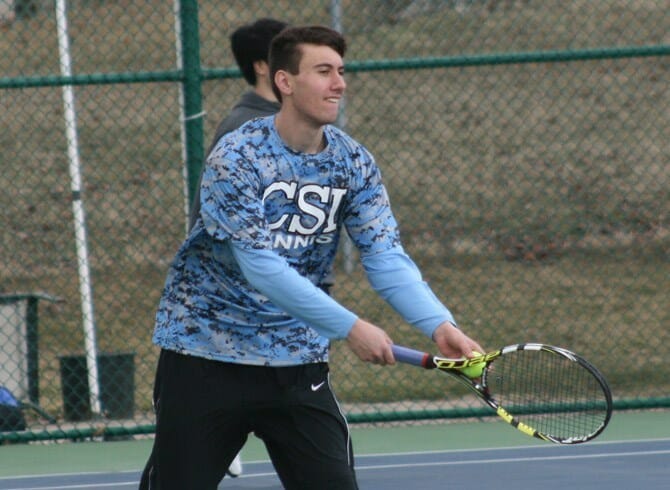 The College of Staten Island men’s tennis squad will easily be playing their most important match of the year, taking on Baruch College as part of the 2015 CUNYAC Postseason Tournament Semifinals at the National Tennis Center in Flushing, NY. Match time is set for 1pm. The Dolphins (9-3) defeated CCNY in their quarterfinal match to earn the right to face off against the Bearcats, and the winner will advance to Thursday’s Final, also to be played at National Tennis Center.

CSI enters as the No. 3 seed in the tournament and Baruch enters as the No. 2. These two teams, along with Hunter College, finished tied for first place in the CUNYAC during the regular season, but tie-breakers determined seeding. In the other semifinal game this afternoon, top-seeded Hunter College takes on No. 5 John Jay College. The Bloodhounds scored the only upset in the tournament thus far, defeating No. 4 Brooklyn College on Friday.

The Dolphins are hoping to avenge a regular season loss at the hands of the Bearcats this season, their only CUNYAC loss of the year. The Bearcats prevailed, 6-3, but the match was incredibly competitive the entire way, with Baruch coming from 5-1 behind in third doubles to win, 8-5, and another two singles matches being decided by a third-set tiebreak.

Admission to today’s matches at NTC are FREE of charge. If you cannot make the game, you can follow live statistics via the CUNYAC webpage here.