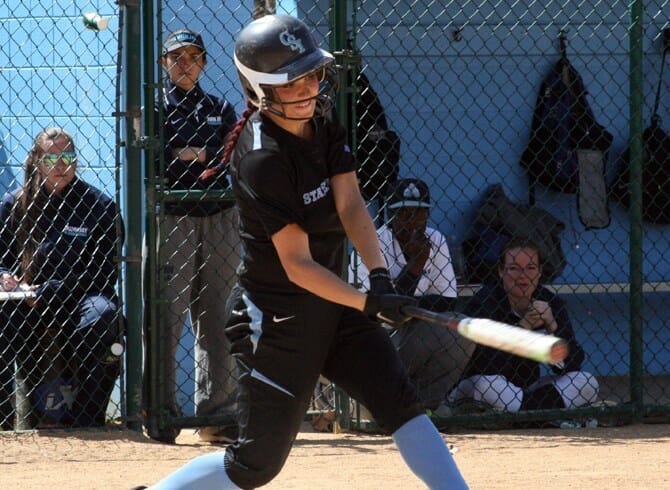 Postgame Interviews – The College of Staten Island women’s softball squad claimed the 2015 CUNYAC Regular Season Championship today, swiping a pair of doubleheader wins over John Jay College to run their CUNYAC record up to 11-1.  The Dolphins survived a late John Jay scare to score a 4-3 win in the opening game, then followed with a heavy-handed, 20-1, win in the second matchup.  CSI was the visiting team on its home field for its CUNYAC finale.  John Jay fell to 13-17 overall, and 5-8 in conference play.

The Dolphins scored three runs in the first inning of game one to take a foothold of the opener.  The Dolphins loaded the bases and consecutive singles by Danielle Locke and Maxine Jasko powered runs home, and later, Nicolette Trapani drew a bases loaded walk to lead in another run to make it 3-0.  JJC pitcher Sara McKenna settled from there to retire the Dolphins in the inning and did an admirable job the rest of the way as CSI could not seem to get timely hits with runners on base the rest of the way.  Her performance was matched by CSI starter Jacqueline Cautela, who despite allowing baserunners, kept JJC off of the scoreboard.

CSI made it 4-0 in the fifth inning when Locke came in score after she tripled and was attempted to be picked off.  The Bloodhounds answered, however, with a three-run fifth of their own to threaten the result.  Lisa Pellegrino knocked in a run on a ground out, and then Danielle Minaya would score on a wild pitch and Jessica Varela was run in on a two-base fielding error by the Dolphins outfield.  Cautela worked her way out of the jam but CSI nursed only a slender, 4-3, edge.  The sophomore pitcher then stepped up in in the sixth and seventh, taking the Bloodhounds down in order for the first time in the game to help CSI secure the win.

Like the opener, CSI tallied early in the first before JJC even came to bat, this time on a double steal that scored Cautela and moved Gilliam over to second.  After CSI starter Nicolette Trapani retired the Bloodhounds in order, CSI then erupted for seven big runs in the second inning helped along by two John Jay errors and highlighted by a three-run homerun by Danielle Locke.  JJC starter Pellegrino also fell in to trouble by walking five batters and at the end of two innings, her pitching day was over.

One inning later, senior Brittany Smith, with the outfield playing very shallow, laced a screaming ground ball that made its way all the way to outfield wall, leading to a three-run inside-the-park homerun, her first of the season, giving CSI a commanding 11-0 lead.  The teams traded a run from there, and in the fifth inning, CSI put up an eight spot to make it 20-1.  The inning featured three John Jay errors and an RBI double for Locke, who wrapped up a monster statistical day by going 4-5 with five RBI and four runs scored.

Trapani earned the win by tossing all five innings, fanning six, while allowing just four hits and an earned run.

The win gave CSI the CUNYAC Regular Season Championship, and the team has now won eight-straight CUNYAC contests.  The team will play four non-conference doubleheaders before defending their championship as part of the 2015 CUNYAC Postseason Championship beginning Friday, May 1, where they will don the No. 1 seed.

Up next for CSI will be a doubleheader against St. Joseph’s College (LI) on Wednesday, April 22, beginning at 5pm.  It will be Senior Night at CSI, as the Dolphins will honor their seniors, Locke and Smith, prior to the games.