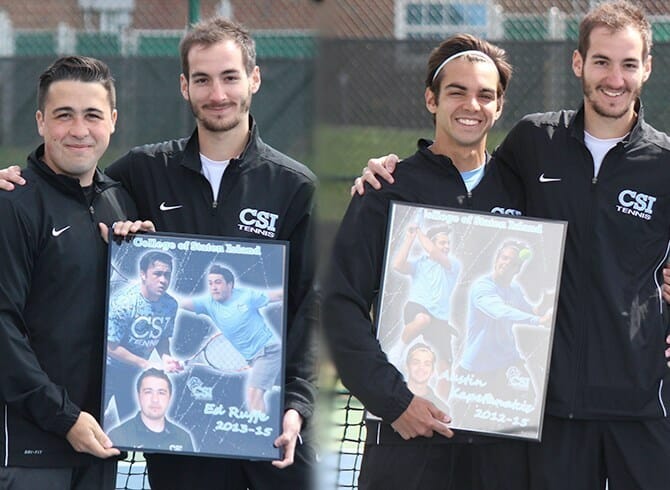 The College of Staten Island men’s tennis team took care of business this afternoon and won their third straight match by defeating City College of New York in the CUNYAC Quarterfinals, 5-0.  The win moves the Dolphins to 9-3 while the Beavers fall to 3-13.

The Dolphins jumped out to a quick 3-0 lead as Staten Island was able to sweep the Beavers in doubles lead by the team of Austin Kapetanakis and Chris Livoti who won their match 8-0 from the No. 2 spot.

Once play switched to singles the Dolphins needed only two more wins to seal the deal as in the playoffs first to five wins.  Ed Ruffe would fall behind early but was able to begin to fight back in the second set and take a 1-0 lead in the No. 1 spot.

Play would come to an end however, before Ruffe was able to finish his comeback as the Dolphins won the two games they needed and they came from the No. 2 spot of Livoti and the No. 3 spot of Kapetanakis.

The Dolphins now move on to the CUNYAC Semifinals which will take place on Sunday, April 26 at the National Tennis Center in Flushing, NY at 1:00 p.m.