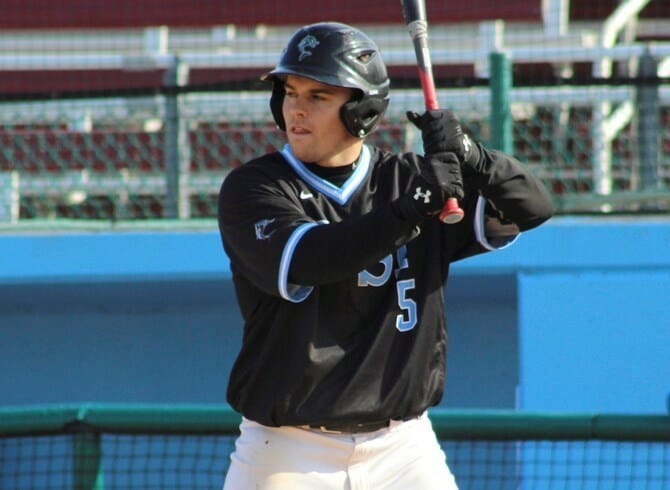 The College of Staten Island men’s baseball squad swept a CUNYAC doubleheader today, defeating The City College of New York, 11-5, and 12-3, to clinch the 2015 CUNYAC Regular Season Championship, earlier this afternoon at Randall’s Island.  The wins improved CSI to 20-10 overall and 7-1 in the CUNYAC, while CCNY fell to 12-12, 4-4, respectively.

The Dolphins needed only a split in the afternoon twinbill to secure the title but went one better.  In the opener, the Beavers took a 1-0 lead against CSI starter Ryan Kennedy thanks to a Kennedy Tavares RBI-basehit, but CSI quickly responded with a Frank Sconzo two-run single in the second to take a 2-1 lead.

After tallying two runs in the third, CSI erupted for four runs in the fourth to take a huge, 9-1 lead.  Glenn Glennerster highlighted the inning with a two-run double against CCNY reliever Anthony Cacchione.  After CCNY narrowed the gap to 9-4, CSI buffered the lead again with a bases-clearing triple by George Kantzian that accounted for the rest of the Dolphins’ scoring.

The Dolphins made it sweep of CCNY with a 12-3 win in game two, but the game was a lot closer than the score would indicate.

A Glennerster sac fly in the first with the bases-loaded would score Eli Rodriguez against CCNY starter Sacha Urbach, but CSI would strand the other runners in that inning.  In the second, the Beavers got even at 1-1, until CSI tallied in the third to make it 2-1 on an unearned run via an error.

CSI starter Jeff Manzi then ran into trouble.  CCNY tied it up in the fourth via an infield hit by Jhosse Estrella, and then in the sixth, the Beavers took the lead on another Estrella hit to make it 3-2.  With relief pitcher in the game for both teams, CSI tied it up in their final turn at bat in the seventh, as Frank Muzzio ripped a sac fly to score Nick Delprete.  Jason Failia came in to pitch for CSI and shut the Beavers down in the seventh sending the game to extra frames.

Neither team scored in the eighth, but CSI totally erupted in the 9th, scoring a total of 9 runs.  Delprete scored the game-winner on a Frank Smith RBI-hit but CSI would add plenty more, highlighted by a two-run double by Greg Manassa and a bases-clearing three-RBI triple by Delprete.

CSI gets right back to action on Sunday, when they travel to MCU Ballpark in Brooklyn, NY for a non-conference doubleheader against New York University, beginning at 12 Noon.