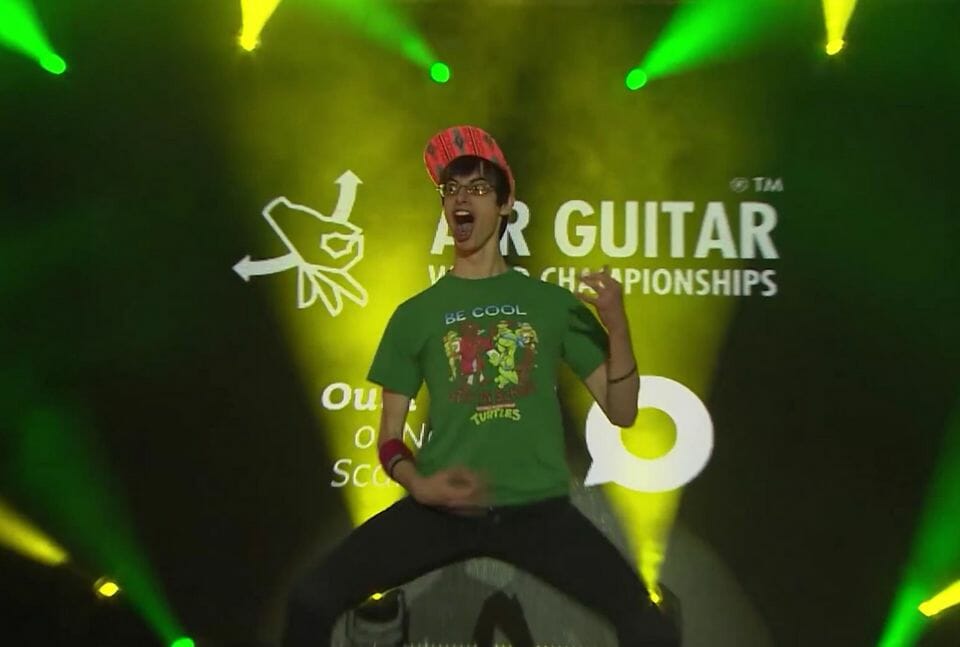 STATEN ISLAND ADVANCE. — Before he even takes the stage, the crowd goes wild for Airistotle.

Shielding his eyes from the spotlights, the boyish 26-year-old entertainer looks out onto his audience, a “wow” taking shape across his mouth.

A young lady in the front row screams her intentions to be the mother of his child. Another man demands he remove his top. Aristotle gives the man a coy but confident glance.

And then his performance begins.

The thing about Airistotle is, he doesn’t even play guitar. But in the absence of an instrument, he’s the coolest rockstar you’ve ever seen.

He’s a three time national Air Guitar champion and he’s here to melt your face off.

THE MAKING OF A WINNER

When he’s not shredding literal air and fending off “air groupies,” Airistotle is Great Kills native Matt Burns, College of Staten Island graduate and comedian through and through.

Burns got into air guitaring fresh out of high school after he saw the 2006 documentary “Air Guitar Nation” about the first U.S. Air Guitar championships. As an actor and comic, the idea of entertaining an audience of potentially hundreds of drunk, screaming fans with nothing but his hands and an abandonment of pride spoke to him.

“I thought it was stupid and beautiful and amazing and I had to get involved,” Burns said.

He watched videos of previous winners and started developing his own character: A dweeby 12-year-old boy with a limber, awkward way of moving about the world; except for when he’s rocking out to pop-punk songs. For a guy that still gets carded when he buys tickets for R-rated movies, the shoe fits.

He christened himself Airistotle — a pun on the airy nature of his work and a nod to the film, “Bill and Ted’s Excellent Adventure.” In the movie, the young air-guitar playing men meet the Greek philosopher Socrates in a time-traveling expedition. Socrates, Aristotle, you get the picture.
Now seven years deep in the competitions, Burns estimates that he’s competed about 15 times, and performs at paid gigs around the world on the side. Though he doesn’t win any money for his victories, the U.S. Air Guitar organization pays for his travel. It’s taken him to places a daytime waiter in his mid-20s would probably never have gone, like the Middle East.

WHAT IT TAKES TO BE A CHAMPION

Judges at air guitar competitions look at three categories of performances to score the “musicians.” First, technical ability. Are they hitting the hypothetical notes? In this category, it actually helps to have little real guitar experience, Burns said.

“I actually learned guitar after I started competing, just to know what the power chords looked like, but the problem when people actually play real guitar is, they get too into playing the actual notes and not enough on the performance,” Burns said.

The second category is stage presence: how well the performer can rile up a crowd.

“A well-placed pelvic thrust can really make a difference between a championship or not,” Burns said.

The last category is “airness” — or when the act transcends imitation.

“That one is impossible to define,” Burns said. “You know it when you see it.”

For Burns, what “airness” usually looks like is a blur of long brown hair, legs unhindered by gravity and arms that can orbit their hypothetical guitar with the elasticity of a rubber ball on a body-shaped paddle.

“You’re almost more of a frontman, like the Freddie Mercury of the band,” he said. “You need the whole crowd to buy into the idea that you’re play a guitar.”

Burns doesn’t choreograph his routines — in fact, one component of the competitions involves performing to a surprise song. Performers get to pick the other song ahead of time. Burns doesn’t really train either, other than listening to as many rock songs as possible before the competitions.

“You just need to have a good character and you have to not be afraid to be embarrassed,” Burns said.

“And you need to drink. A lot. We usually say these things have a two beer minimum,” he added.

At the end of this month, Burns will head to Finland for the third time to represent the United States in the international air guitar competition. More than 5,000 people watch the performances, which are complete with jumbotrons and a live-stream.

It’s a sensation that, on the surface, seems boring and void of real talent. But when you think about it, there’s a trifecta of talent involved, Burns noted.

“It’s one third rock concert, one third sporting event and one third comedy show,” Burns said. “So you have all these things rolled into one.”

The past two years, Burns has come in second at the global air-off. Allow me to repeat that: This Staten Islander is the second-best in the world at air guitar. I’ll also remind you that he’s the United States’ best air guitarist for three years: 2012, 2014 and 2015.

This year, he could very well be the world’s best air guitar player. The competition will be live-streamed on August 28 on the AirGuitarWorldChampionships.com.

So with the world, quite literally, his stage, he’s prepared to give the performance of a lifetime.

“I’ve done acting and theater and comedy, but this is hands down my favorite type of performance.”

By Lauren Steussy. © 2015 SILive.com. This article first appeared on SI Live and the Staten Island Advance on on August 18, 2015 and is reprinted here with permission.