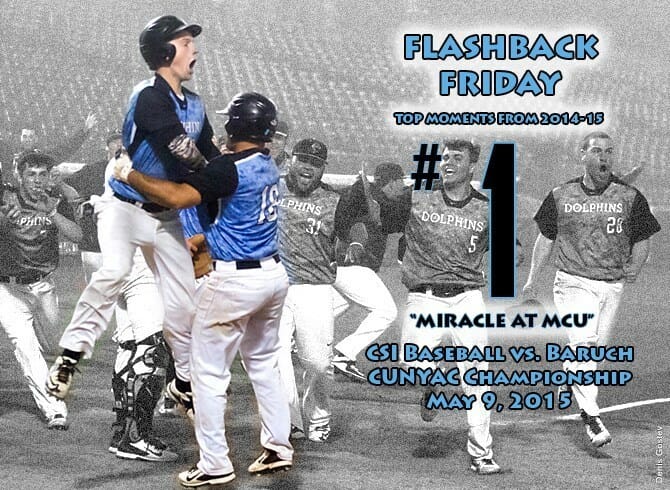 Flashback Friday looks at the top moments from the 2014-15 athletic year at the College of Staten Island.  This week, we crown the top moment of the year, when the CSI Baseball squad scored a pair of come-from-behind wins, the second in unbelievable fashion, to score their 17th CUNYAC Championship in team history.

#1 – Men’s Baseball – Miracle Comebacks Highlight CUNYAC Championship Win
Date:  May 9, 2015
Who:  CSI Baseball vs. Baruch College
Where:  MCU Ballpark – Brooklyn, NY
What Happened (click links for highlights):  A day before the CUNYAC Championship, CSI had fallen to Baruch College and saw their elimination game against CCNY suspended due to dense fog.  So, a weathered CSI team picked up action on May 9 at MCU Ballpark having to secure the win over CCNY, before facing the uphill climb to beat Baruch not once, but twice to try and collect its 17th CUNYAC Postseason Championship.  In the opener, the CSI bats were quiet as the team fell behind, 3-0, and then 4-2 going into the bottom of the 8th inning.  CSI erupted from there, scoring five big runs in the eighth, to score a 7-4 win, setting up a winner-take-all scenario under the MCU lights.  Whatever momentum CSI had was lost in the second deciding game, as Baruch seized complete control with a 6-0 lead going into the bottom of the sixth inning.  CSI would chip away, but found themselves down 6-2 going into the last of the ninth inning.  From there, a script fitting for a Hollywood movie would ensue.  With the fog closing in, CSI managed to load the bases with one out and junior George Kantzian, who grounded into a double play his last time at the plate, up at bat.  Kantzian battled in the at-bat and stroked a towering shot to left field that was lost in the fog but would go over the wall, resulting in a game-tying grand slam homerun that forced a 6-6 tie.  CSI would strand the game-winning run on base in that inning and the game moved into extra frames.  With both teams deep into their bullpens, jams were escaped by both teams before a move into the 12th.  A storybook CSI ending seemed doomed when Baruch touched CSI for a whopping three runs in the top of the 12th, making it 9-6, and CSI would need to dial up another improbable last-at-bat comeback for a chance to hoist the trophy.  They would deliver.  CSI would load the bases, capped by a Kantzian walk.  With two outs, Bobby Drake kept the dream alive with a two-RBI single to make it 9-8, and then freshman Eli Rodriguez turned on a pitch and launched a ball into deep right field, scoring Kantzian to tie and Drake for the win, giving CSI an unbelievable 10-9 win, complete with a mobbing of Drake at home plate and Rodriguez at second base.  The win gave CSI a 23-15 record and its 17th CUNYAC title. Looking back…with George Kantzian
In order to get to the final game, the team needed to pull out a suspended match against CCNY and then come-from-behind to beat Baruch in game one to set up a winner-take-all scenario.  How was the team feeling after that initial win over CCNY?  We felt great, we knew that it wasn’t going to be easy to beat Baruch  twice, but we knew we could do it if we took the game slow, and if we were able to focus from the first pitch to the last out.

A theme against Baruch in that first game was their ability to silence your bats.  What were the Baruch pitchers doing to keep you so off-balance?  Perez did a good job, keeping us scoreless through five innings. He was really holding his own, disturbing our timing, making us swing at his pitches and just keeping us uncomfortable at the plate.

In the final game you came in to relieve Frank Sconzo at catcher in the sixth inning and by that time the team was down, 6-0.  How frustrating was it to see the team fall into such a big hole?  It was extremely frustrating to see us down by that much but we still had three more innings to play so I knew we had time to get something going.

After chipping away to make it 6-2, you grounded into a double play in the seventh inning to end the inning.  What were you feeling coming out of that at-bat?  I just felt annoyed with myself that I couldn’t do more with my at bat, but I had to let that one go and focus on the upcoming innings.

Bottom of the 9th and the bases are loaded with one out.  Are you getting up looking to put one over the fence?  Take me through the at-bat?  As I was walking up to the plate I really wasn’t thinking.  There was no fear, no pressure, no nerves, basically emotionless.  I just told myself to be in the moment, you are here for a reason, it’s just like any other at bat, nothings changes.

The fog was so thick in that game.  Did you even know it went out?  And how incredible was it to hit a game-tying grand slam in the bottom of the 9th inning?  I knew it had a chance to get out but I wasn’t worried about that, as soon as I saw the ball go up I took off.  The feeling afterwards was great, we were down by four and now we had a chance to win the game.

In the 12th inning you walked and then scored the game-winning run on Eli’s RBI-double.  How exhilarating was that moment for you and the team?  Over three months later, can you still believe it?  After I walked and Bobby Drake got on base I knew that Eli would come through, when I touched home and saw Bobby rounding third, we locked eyes and knew we did something great.  Of course I still believe we won, I knew we were gonna win the whole time, just ask Coach Mike (Mauro), he’ll tell you.