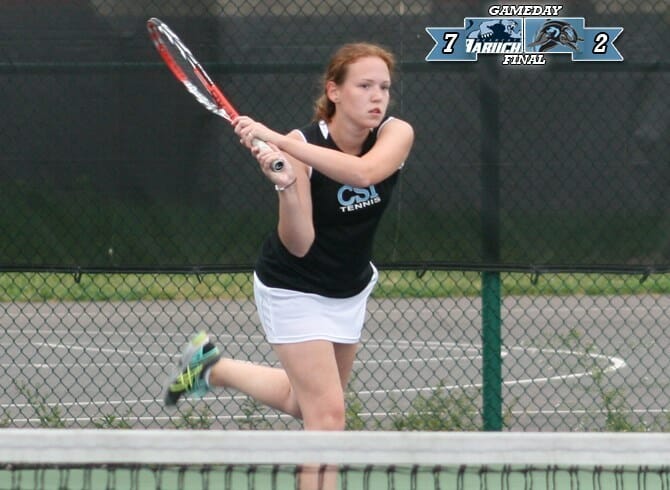 In a showdown that pit the last two remaining unbeaten teams in the City University of New York Athletic Conference, Baruch College got the better of the College of Staten Island women’s tennis squad, 7-2, in conference play at the CSI Tennis Center in Staten Island.  The loss sends CSI to 6-2 overall and 2-1 within the CUNYAC, while the Bearcats improved to 7-0, 4-0, respectively.

In doubles play, Baruch shot out to a 2-1 lead, thanks to a big win in the No. 3 spot.  CSI got on the register first with a win in the No. 2 spot.  The duo of Nozima Toshpulatova and Michelle Kushnir got the job done with an 8-2 win, but in the top spot, Baruch countered with a win by the same score from Allie Jackson-Hing and Daria Vasekina.  In a pivotal swing match, the CSI duo of Viktoriya Volkova and Samantha Mazier were locked in with BC’s Dzessika Bishenkevi and Brooke Severance.  After falling behind, CSI was able to draw even at 4-4, but in the end, the Bearcats settled in and played well, winning the set, 8-5.

The momentum carried into singles.  CSI got even at 2-2, when Kushnir scored a decisive 6-1, 6-2, win at the No. 5 spot against Bishenkevi. From there, however, Baruch was able to seize momentum.  In the top flight, BC quickly took back the lead with a Jackson-Hing win over Toshpulatova, making it 3-2.  The remaining flights were heavily competitive, but all won by the Bearcats.

CSI will try and get back on the winning track on Friday, when they host SUNY-Oneonta at 3:30pm at the CSI Tennis Center, as part of non-conference play.