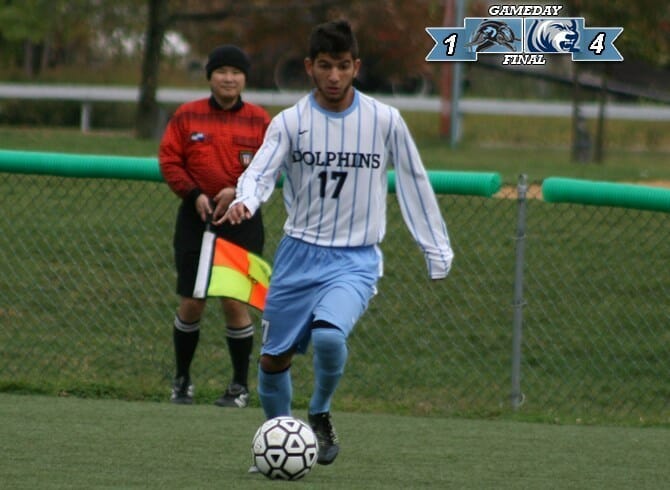 The College of Staten Island men’s soccer squad saw their season-opening skid extend to three games, as the Dolphins fell to Drew University, 4-1, in the final game of the Drew Fall Festival held in Madison, NJ.  Drew extended to 3-0 on the season, while CSI slipped to 0-3.

Statistically the game stayed about even, but it was the home Rangers that had extended possession and made a series of runs in the opening frame to keep the pressure on.  Just under 13 minutes into the game, the Dolphins sent a flurry of offense in front of the Drew goal, but after being denied, the Rangers came down the field with quickness.  A foul just outside the goal box put Drew in business and Daniel Girado launched a free-kick that found the inside low corner past CSI keeper John Goieli to give DU a 1-0 lead at 12:55.

Less than three minutes later, CSI again would press, and after John Marques made a save on a Nicholas Bacarella shot, CSI was issued a corner.  From the set piece, freshman Emmanuel Agboola headed the ball into the twine on the assist by Philip Lefkowitz to knot the score up at 1-1.

From there, however, Drew took over.  The home team capitalized and maximized on their chances.  Less than two muntes after CSI equalized, DU’s Dylan Hammer skated through the right side of the CSI defense and pivoted around three defenders to gain the goal mouth, sliding a shot past Goieli to put Drew back up top, 2-1 at 17:29.  Hammer almost struck again over a minute later, slamming a ball off of the crossbar, but just two minutes after that, Cole Leckburg tallied off of a Hammer feeder, beating Goieli on the right side to give Drew a commanding, 3-1, edge.

Play settled from there, and although CSI had the last four shots of the period, DU went into intermission up by two goals. Then, eight minutes later, the Rangers broke things open on another Hammer goal, this time after he capitalized on a loose ball in the CSI box that he would power home.

Both teams would earn modest chances from there, with team swinging together solid blocks of possession time, but very few quality chances and a couple of free kick opportunities from just outside the penalty box would sail wide for both teams in the closing 20 minutes.

CSI will next be in action on Wednesday, September 9, when they travel to take on Rowan University for a 7pm, non-conference tilt.