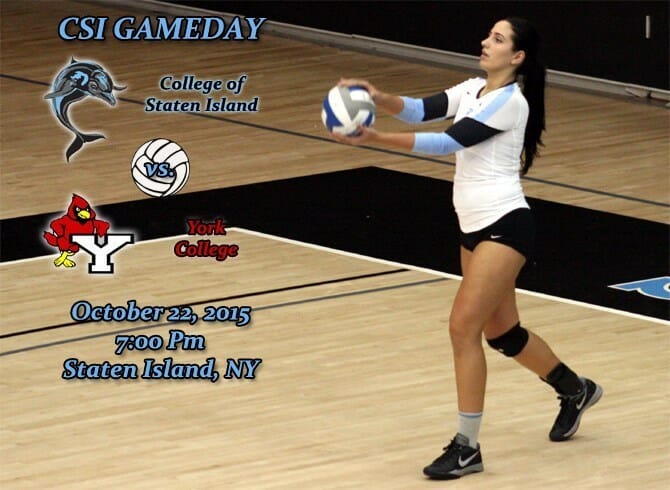 On a night when the Dolphins will honor seniors Selma Kolenovic and Brittany Minondo, the College of Staten Island will close out the CUNYAC portion of their season when they face York College at the Sports & Recreation Center at 7pm. The Dolphins come in owners of a 7-12 overall mark at 2-4 in CUNYAC. A win tonight will help them move past York in the conference standings.

CSI vs. YORK COLLEGE AT-A-GLANCE
Matchup: CSI (7-12 overall, 2-4 CUNYAC) vs. York College (4-16 Overall, 2-4 CUNYAC)
Where: College of Staten Island, 2800 Victory Blvd, Staten Island, NY
First Serve: 7:00pm
Live Video: www.csidolphins.com/CSISportsNet
All-Time Series: CSI leads 10-3
Last Year’s Result: CSI won 3-2
Players To Watch (CSI): Prior to first serve, CSI will honor seniors Selma Kolenovic and Brittany Minondo. Both have had great careers and both are enjoying very good seasons. Kolenovic leads the team in kills with 110 and is fourth in digs with 119. Minondo is leading the way in assists with 292 and also has the team lead with 63 service aces.
Players to Watch (YC): Renee Daley and Shauncia McClendon are a formidable threat up top as they have combined for 248 kills this season. Mary Pamolarco is the defensive ace in the back, sporting a team high 201 digs.
News and Notes: CSI has won the last 10 meetings over York, but the teams have been very competitive, as each team has taken at least a game off of the other every year since the 2009 season. Despite the 10-3 overall record against the Cardinals, CSI is only 3-2 all-time against York at the Sports & Recreation Center. A win by the Dolphins tonight and they will guarantee themselves no lower than the No. 6 seed in the upcoming CUNYAC Tournament. They can finish as high as No. 5 in the standings. Should York win, however, then CSI will finish no higher than No. 7 in the standings and although they have clinched a playoff spot, they could finish as low as eighth.