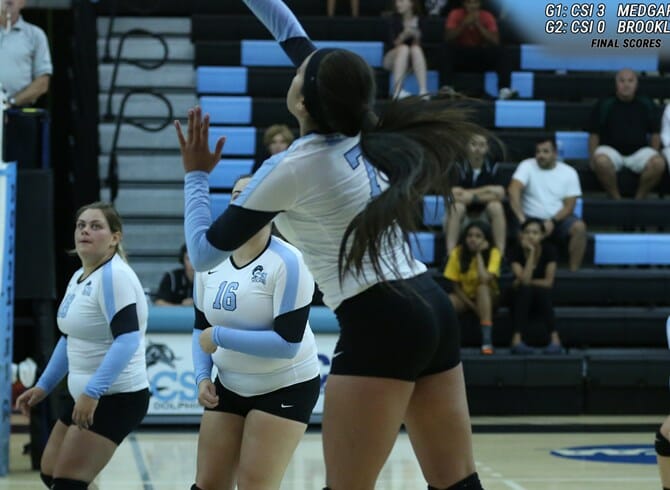 The Dolphins jumped out to a large 10-3 lead to start their match against the Cougars.  Caitlin Esposito got Staten Island going with her serves.  Esposito troubled the Cougars as they would send over free balls that allowed Vanessa Reyes and Alexandria Boachie-Ansah to capitalize and collect kills for their squad. Later in the opening set, Reyes would collect five service aces before Shania Laguerre was able to find an open spot in the Dolphins defense to return the serve back to her side.  The Dolphins would gain a nice confidence booster with an opening set win which would lead them to cruise in set two.

Jessica Cafiero and Boachie-Ansah had the Dolphins jump out to a 5-0 lead in the second set.  Boachie-Ansah was able to pick her spots and tally two kills while Cafiero picked up two service aces to begin the set. CSI, coming off of their opening set win, was really able to cruise past the Cougars in set number two as their attack was finding open areas all over the court.  Boachie-Ansah capped off a good set for the Dolphins with a pair of aces while Ashley Notaro would put her team one point shy of the win.  A bad set by Medgar Evers would put the Dolphins up 2-0 of their opponents and in great position heading into the third set.

The Cougars were fully warmed up by the third set and held a 6-5 lead in the early goings. It wasn’t until Cristal Joseph surrendered the lead with a service error that the Dolphins were able to regain control of the set.  CSI had their best hitting performance in the final set of their opening match as they hit .471 with 9 kills on 17 attacks with just one error. With the lead, the Dolphins never looked back as they would go on an 8-2 run to increase their lead to 20-13.  Patricia Elie served up two aces during that run. The Dolphins were able to finish the sweep with a 25-16 win over the Cougars and warmed them up for their next CUNYAC match against the Bulldogs.

Boachie-Ansah led all Dolphins with seven kills on 17 attacks while Jessica Cafiero paved the way with 12 assists.

The Dolphins struggled against the Bulldogs in the opening set and had their worst hitting performance of the day as they hit -.125 with just one kill on 16 attacks with three errors. The Dolphins and Bulldogs were tied at two when Brooklyn ripped off a 19-0 run that doomed the Dolphins.  Head Coach Larry Ng used both of his time outs to try and stop the Brooklyn run but they were ineffective as the Bulldogs were firing on all cylinders. The Dolphins would fall in the opening set 25-3 but rebounded nicely from that loss in the following sets.

The Dolphins and Bulldogs battled it out in the second set.  Staten Island held a 19-16 lead in late in the set as Kathryn Adams was in the zone.  Adams tallied four of her five kills in the second set but she cooled off towards the end of the set which allowed the Bulldogs to go on a 7-0 to take a 23-19 lead that the Dolphins were unable to come back from.   Sarina Rozek was key for the Bulldogs in the comeback as she tallied four service aces during that run.
The third and final set saw the Dolphins fall by the same margin as they did in the previous set.  Up 21-18 the Dolphins offense stalled once again as the Bulldogs were able to finish the game on another 7-0 run.  CSI would fall 25-21 and split the day.

The Dolphins return to action on Tuesday, September 12 when they travel to take on Cairn at 7 pm.