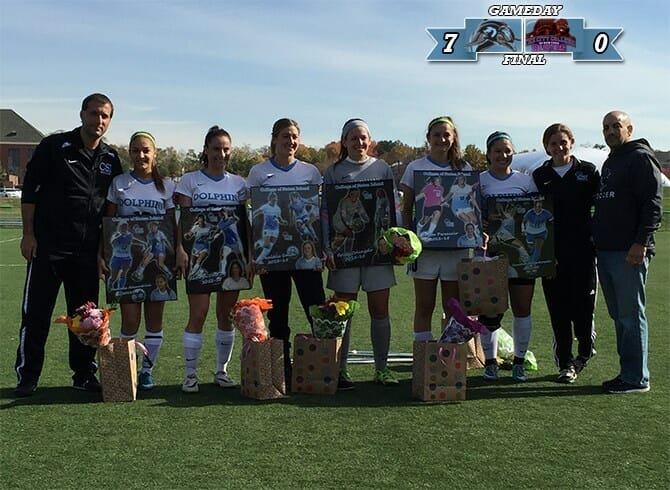 The College of Staten Island women’s soccer team honored their six seniors prior to today’s game which consisted of Danielle Alexandrini, Kathryn Dowling, Danielle Smith, Kristy Colangelo, Krysta Percaccio and Samantha Wysokowski. The Dolphins thwarted CCNY’s efforts to score a goal in a 7-0 rout before the start of the CUNYAC Playoffs. The Dolphins finish the regular season with an 11-4-1 overall record while the Beavers finish the season 2-14-1.

Wysokowski got off to a great start in today’s contest as she netted her first of three goals just 14 minutes into the game on a beautiful low cross by Jennifer Cosenza. Cosenza would be rewarded for her assist 10 minutes later when Lauren Smith chipped the ball over the back line which met a sprinting Cosenza who took one touch and buried top shelf against the Beavers’ goalie.

Smith was able to break through the Beavers dam all day as just a few moments after her assist to Cosenza she found Wysokowski who cannoned one far post for her second and the games third goal. Staten Island would possess the ball for the remainder of the half and held the Beavers without a shot in the first half.

The starters returned to the pitch in the second half after sitting out the last 10 minutes of the first half to get some rest. Senda Karagozler tallied her second goal of the season on a through ball from Alexandrini where she tucked it near post against Emily Ramos.

Alexandrini finally put the ball in the back of the net after having several opportunities all game when Stephanie Rivera found some space inside the box and crossed it in for Alexandrini to poked it far post out of Ramos’s reach.

Smith played well all game and earned her team a penalty kick in the 81st minute after she was viciously taken out in the box after dribbling by a few players. Smith would be subbed out on the play as she went down with a brief injury. Percaccio was called upon to take the PK and she did not disappoint as she rocketed one to the upper left side of the goal for her second goal of the season.
After scoring two goals early in the game Wysokowski was determined to get the hat-trick on senior day and she did just that when Karagozler sent a high pass which was chested down and ripped from the right side of the 18 yard box to the far left side for the goal.

Wysokowski was awarded with a Gatorade bath after the game for her efforts in this game and throughout the season.

Colangelo didn’t have to face any shots in this contest and was awarded her eighth shutout of the season tying the most clean sheets in a single season which was set by former goal keeper Victoria Donegan.

The Dolphins are back in action on Wednesday, November 4 at 6:30 pm where they will take on Brooklyn College in the CUNYAC Semifinals.