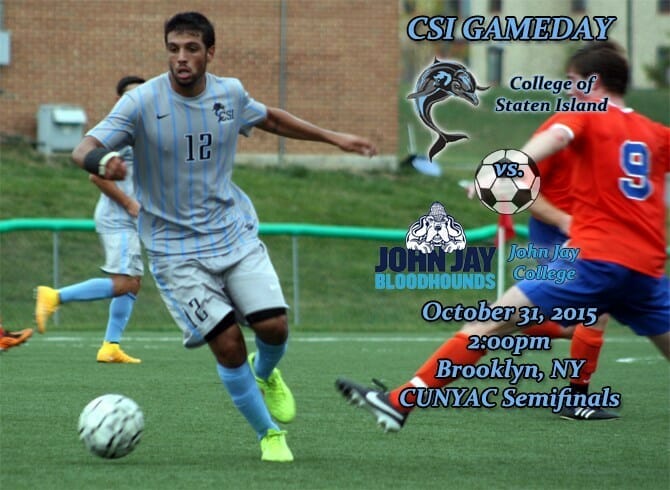 The College of Staten Island men’s soccer team earned a semifinal spot against John Jay College via an 11-0 victory over Medgar Evers College on Wednesday in the CUNYAC Quarterfinals. The Dolphins headed into the CUNYAC Postseason with the no.1 seed for the second year in a row. Their opponents of John Jay are ranked fifth in the tournament, and knocked off defending-champs Baruch College on Wednesday in quarterfinal play, 1-0.

CSI vs. JOHN JAY COLLEGE AT-A-GLANCE
Matchup: CSI (9-8-1 overall, 6-1-1 CUNYAC) vs. John Jay College (7-11 Overall, 4-4 CUNYAC)
Where: Brooklyn College, Brooklyn, NY
Kick-Off: 2:00pm
All-Time Series: CSI leads, 25-9-2
Last Year’s Result: W 3-1
Live Video / SportsNet: www.csidolphins.com/CSISportsNet
Players To Watch (CSI): Ruben Diaz makes his return from suspension today and will help the Dolphins secure up their back line after the Dolphins surrendered four goals in three games while he was gone. Brayan Evo and Emmanuel Agboola were in the zone on Wednesday as Evo tallied three goals and an assist while Agboola netted a goal and three assists.
Players To Watch (JJC): The CUNYAC ‘s leading scorer, Graysen Carlson, will look to net a goal against the Dolphins today after being held scoreless in their last encounter. Curtis Harbers leads the Bloodhounds with eight assists and will do all he can to get the ball to Carlson in hopes of breaking the Dolphins’ defensive line and put one passed CSI’s goalie.
News and Notes: The Dolphins defeated the Bloodhounds 3-0 earlier this year at the CSI Soccer Complex which saw goals from Nermin Kurtesi, Nicholas Bacarella, and Horatio Reid. Staten Island boasts a 3-1 all-time record in the CUNYAC Postseason against John Jay. Although the Dolphins and Bloodhounds have met four times in the postseason this will be the first meeting in the semifinals.