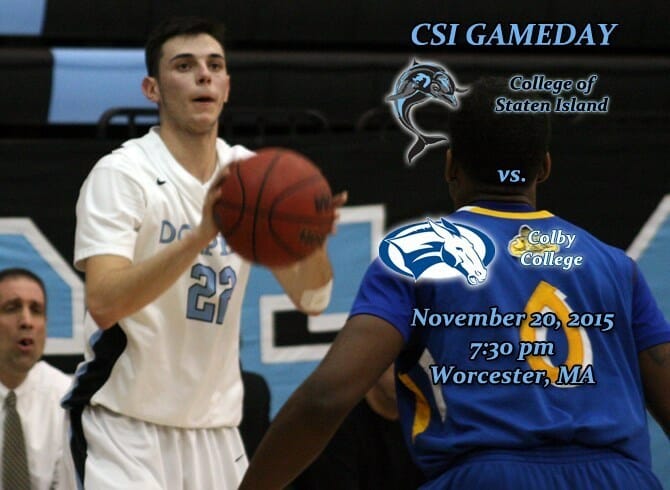 The College of Staten Island men’s basketball team scored a solid win in its opener to the 2015-16 season earlier this week, and will look to keep the ball rolling when they face Colby College in the opening stage of the Worcester Polytechnic Institute Tip-Off Tournament in Worcester, MA.  CSI tips off at 7:30pm, and the winning side will play in the Championship Game on Saturday at 3pm, while the losing team will play in the 1pm Consolation game on Saturday.  In the other tournament game this evening, host WPI takes on Curry College.

CSI vs. COLBY COLLEGE AT-A-GLANCE
Matchup:  CSI (1-0 overall, 0-0 CUNYAC) vs. Colby College (0-0 Overall, 0-0 NESCAC)
Where:  WPI Sports & Recreation Center, 100 Institute Road, Worcester, MA
Tip-Off:  7:30pm
Live Video:  http://athletics.wpi.edu/sports/mbkb/live?
Live Stats: http://athletics.wpi.edu/sports/mbkb/2015-16/boxscores/20151120_qy78.xml?
All-Time Series:  First Meeting
Players To Watch (CSI):  The Dolphins ignite the floor with CUNYAC Preseason Player of the Year Will Fonseca, who led the Dolphins with a 24-point effort against Stockton in CSI’s opener on Tuesday.  The Dolphins also got 17 points from senior Thomas Delahanty, who made a pair of late-free-throws as well to seal the game.  Junior Frank Schettino finished with 14 points and four assists, and is expected to be a prime catalyst this season.
Players To Watch (CC):  Luke Westman led all NESCAC players a year ago in field goal percentage and the big man is hoping for another dynamic run in 2015-16.  Along with 6-8 center Chris Hudnut, the team is primed to return to terrific form this season.  Patrick Stewart will also be a forced, having averaged over 11 points and just under seven rebounds per game a year ago.
News and Notes: This is the first meeting ever between these two sides.  Colby hails from Waterville, Maine, and boasted a 13-12 overall record last year despite losing a few of its top players to injury down the stretch.  They narrowly fell to top-seeded Trinity College in their conference tournament quarterfinal, 66-63.  The Dolphins defeated Stockton University on Tuesday, ranked #21 nationally by HeroSports.com.