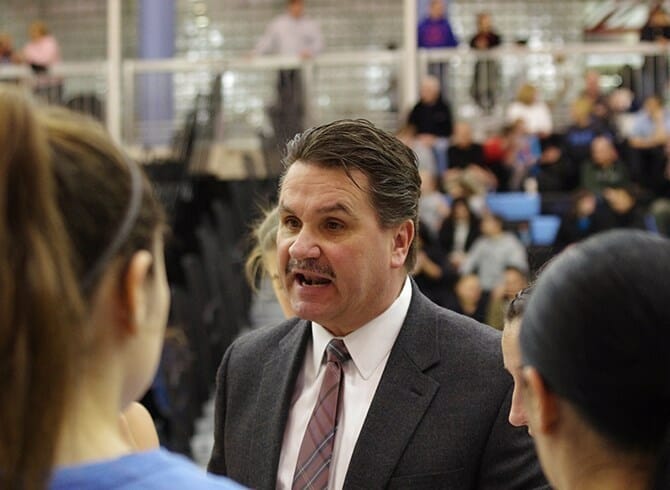 The College of Staten Island women’s basketball squad will tip-off its 2014-15 season tomorrow afternoon as part of the Rose City Classic at Drew University, and the Dolphins will be doing so with championship dreams in mind.  The Dolphins are predicted to finish third in the CUNYAC this season based on the CUNYAC Preseason Coaches’ Poll, but coach Tim Shanahan believes that his team is more than capable of repeating last year’s first place finish.

“I’m very happy with the group of women I have on my team this year, I ask them to do a lot in practice and they always deliver without blinking an eye,” said the coach who claimed the CUNYAC regular season title as well as CUNYAC Coach of the Year awards last season.  “I’m very optimistic for this season and I believe we have the talent to win the CUNYAC title this year.”

The women posted their best record under coach Shanahan by going 21-8 and making it to the CUNYAC Semifinal for the second season in a row.  The Dolphins also made it to the ECAC Semifinals where they were knocked out by CUNYAC rivals Brooklyn College by a score of 61-56.  Injuries caught up to the Dolphins last season, but a fresh start has the group excited again.

Shanahan will continue to use his aggressive, up-tempo, substitution-heavy attack to confuse and keep opponents chasing.  The Dolphins will have ten players returning this season three of which are starters from a season ago and the team will look to their experience on and off the court to help acclimate the freshman into the offense.

“The freshman I recruited can easily be starters for this team, so we should have a very deep bench this season which will help with our fast-paced offense,” he said. The most notable freshman recruit is 5-7 forward Christina Pasaturo who can instantly make an impact in the game when she steps onto the court.  “We are also very fortunate to have Megan Myhre return as she led Division III women’s basketball in 3-pointers per game and I will hope she is able to continue that success this year.”

CSI will be without CUNYAC MVP Melanie Johnson this season as she has graduated and has moved on to further her college academics.  Also missing from the squad is the powerful and physical inside play style that Katelyn Hepworth brought to the game.

One of the big additions to this year’s team is Victoria Crea who moved back to Staten Island and decided to play for CSI.  Coach Shanahan on Crea: “She is an outstanding athlete and we are lucky to have her on the team this year as I can see her being a CUNYAC All-Star in her first year with the team.”

Victoria Gallinaro will lead her team at the point guard position again this season after she assumed that roll after a season ending injury to starting point guard Lisa Galasso last season.  Gallinaro who averaged eight points per game and 46 steals last season will now use her on court decision making to deliver precision passes to open players to help lead the Dolphin charge.

As far as what the season holds in store for the Dolphins, it’s no surprise that despite the coach being optimistic he is still being cautious as he knows each team has gotten better and the level of competition has risen from last season.  “The way I see it, we want to be a championship contender every year, and we are a year closer. We’ve raised the competitive level and our conference schedule will be tougher, so we’re going to need to be better to have better results by the end of the year, but that is certainly the plan.”

The Dolphins will open the season this Saturday, when they travel to Drew University and take on the College of St. Elizabeth in a neutral site contest. The consolation and championship legs of that tourney will take place on Sunday.  The schedule also features a date where the Dolphins will play at the Barclays Center against St. Joseph’s – Brooklyn on December 23, at 3:00 pm.  Tickets to all CSI home games are free and will be played in CSI’s Sports & Recreation Center.