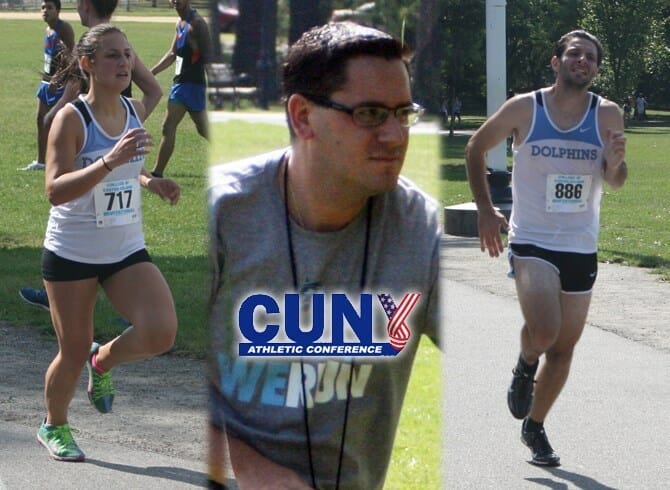 The College of Staten Island cross-country programs put a punctuation mark on their CUNYAC season with another championship in the men’s division and another rousing season on the women’s side, and the CUNYAC has bestowed a collection of eight postseason honors on the units, highlighted by a Coach of the Year selection on the men’s side for Robert Russo.

A total of six selections were awarded on the men’s side with a seventh for the women’s program. Liam McMunn, Matthew Day, Andrew Scharf, Kenneth Morella and Samuel Obisanya earned all-star status with Day doubling on the conference’s All-Sportsmanship team. Junior Rebecca Vidal earned the same distinction on the women’s side.

“My performance as a coach is measured by the success of the athletes. I am honored to accept the award because it reflects the dedication and determination of the CSI Men to give their best in practice and competition throughout the entire season.” said Russo.

CSI’s All-Stars on the men’s side are comprised of their top-five scorers at the CUNYAC Championship Meet, all of which finished in the conference’s Top 15. Liam McMunn led the pack at the Championship, and reigning CUNYAC Rookie of the Year Andrew Scharf highlighted the regular season with four CUNYAC Player of the Year citations.

Combining excellence in performance and through exemplary sportsmanship, CSI also had Matthew Day and Rebecca Vidal placed to those respective teams. Both were emphasized as athletes who made tremendous advances on the circuit this season, a testament to off-season conditioning.