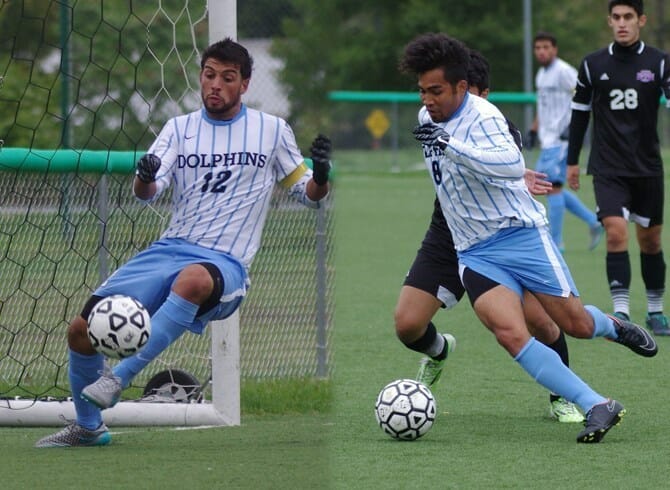 The College of Staten Island men’s soccer squad is in the middle of a strong playoff run, and the squad got an added shot of motivation with three major year-end awards bestowed to them by the City University of New York Athletic Conference. Head Coach John Tardy won his second straight CUNYAC Coach of the Year honor, while Ruben Diaz earned Defensive Player of the Year honors. Rookie Brayan Evo also made a splash with Rookie of the Year honors. Four other Dolphins were also highlighted as second-team all-stars, while junior defender Jacob Szumanski was named to the conference’s all-sportsmanship team.

Tardy is a back-to-back winner, and had his team post another 6-1-1 CUNYAC regular season, complete with a Regular Season Championship. The top-seeds in the tournament got off to a 0-6 start before a 9-game unbeaten streak, their longest since 1984, resurrected their season. Still, for Tardy the win was more about his pupils than the coaching.

“It’s a nice honor to win this award,” said the coach. “An award like this usually comes down to the players and their performance. They worked hard all summer and in preseason and they got results during the season so this award is more of a reflection on them.”

Diaz, a second-year member of the squad enjoyed another stellar season as the team’s center back and for his efforts took Defender of the Year honors. The Dolphins allowed just seven goals in eight conference games, and Diaz added a pair of goals this season, including a game-winner.

“I’ve never played this game for recognition or awards,” Diaz stated. “But to be recognized like this puts into perspective the hard work that came with the season and I am very honored.”

Freshman Evo has been a dynamic force in the middle this season. Together with the stellar quarterfinal win, Evo boasts seven goals and six assists this season on a team-high 62 shots. He’s played in every game for the Dolphins and his 20 total points lead the squad.

All of CSI’s other all-stars for 2015 placed on the second team and there were a healthy bunch. Junior forward Marcin Klim, CSI’s goal scoring leader with 9 markers and 19 points was named to the squad as well as defender Ilir Papraniku, who played in all 19 games adding a goal and a pair of assists. Midfielders Emmanuel Agboola, who leads the team with 9 assists with a pair of goals, and Vasyl Fedortsi (1 goal and 1 assist) also earned on to the squad.

Junior defender Jacob Szumanski, who scored a sensational regular season was named to the all-sportsmanship team, noted for outstanding play with exceptional sportsmanship. Szumanski has tallied a goal and an assist this season, and posted no yellow cards as one of CSI’s top defenders.

The Dolphins will be back on the pitch on Saturday, when they square off against No. 3 City College of New York in the CUNYAC Postseason Tournament Final. The game will be played at Brooklyn College at 4:30pm. It marks the Dolphins’ first trip to the Final since 2007.