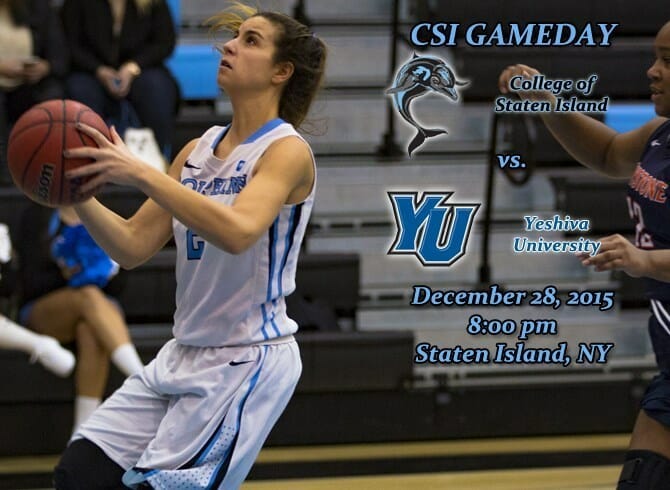 The College of Staten Island women’s basketball team will be looking to put a tough overtime loss behind them this evening, when they take to the Sports & Recreation Center floor to battle Yeshiva University at 8:00pm this evening as part of non-conference play.  CSI is 6-4 overall this season, recently winning five-straight before a 76-75 loss to William Paterson last week.  CSI will look to right the ship and get back in the win column.

CSI vs. YESHIVA UNIVERSITY AT-A-GLANCE
Matchup: CSI (6-4 overall, 3-0 CUNYAC) vs. Yeshiva University (0-11 Overall, 0-7 Skyline)
Where: Sports & Recreation Center, 2800 Victory Boulevard, Staten Island, NY
Tip-Off: 8:00pm
Live Video:  http://www.csidolphins.com/CSISportsNet
All-Time Series: First Meeting
Players To Watch (CSI): CSI sophomores Christina Pasaturo and Samantha Flecker posted double-doubles last week against William Paterson and continue to be CSI scoring leaders in a variety of categories.  Pasaturo leads the squad in points per game at 17.4 and adds a team-best 60 assists, good for an even 6.0 per game.  Flecker is averaging an even 17 points per contest and team-high 8.3 rebounds per game.  She and Angelique Price both are tops on the squad in free-throw shooting at 76.5%.  Jamie Pifalo and Alyssa Carlsen has stepped up defensively.  Pifalo is second on the squad with 23 steals this season, while Carlsen has batted away 13 shots, a team high.
Players To Watch (YU):  The Maccabees are only averaging 45.2 points per game this season, but Julia Owen has been a catalyst, averaging 10.3 per contest and leading the squad with 12 three-pointers.  Michal Alge has been a force on the glass, notching 11.2 per contest to go with 8.9 points per game.
News and Notes: It’s been a tough start to the season for Yeshiva, as they have started 0-11 and have lost their last 18 dating back to last season.  This is the first ever meeting between the two sides, but it will be Yeshiva’s third contest against a CUNYAC-opponent this season.  The team fell to York College in their season opener, and fell hard to CCNY in their last outing on December 16…CSI would like to improve on its free-throw shooting after a 52% effort last week against WPU.  Dating back to last year, CSI is just 7-10 in games when they shoot less than 60% from the line and are 16-6 when they are over that mark.  CSI is 4-0 this season when recording over 20 assists in a game.  Over the last three games CSI has forced an average of 32 turnovers per game.  Yeshiva is committing an average of 25.5 turnovers per contest, so protecting the basketball will be essential to their plans tonight.