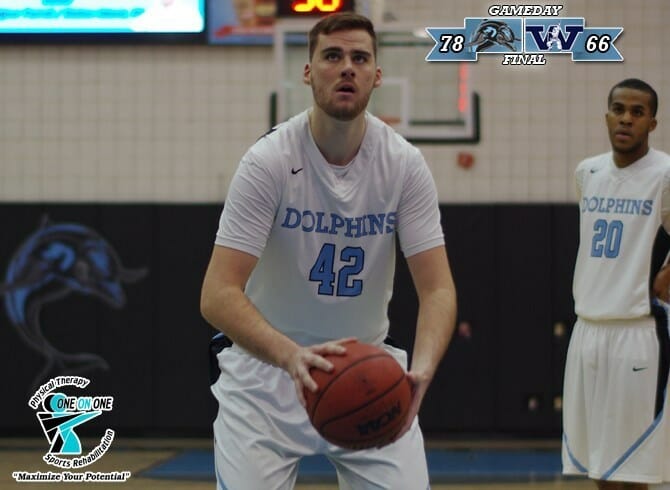 The College of Staten Island men’s basketball squad went up by double-digits early, then warded off visiting Westminster College (PA), to take a 78-66 win to advance to the Championship Game tomorrow.  Winners of four straight, CSI advanced to 7-2 overall, and will face SUNY-Canton, an 85-82 winner over Connecticut College in the tournament opener.  Westminster fell to 2-7.

The Dolphins started the game on fire with a 13-0 run that consisted of five free throws and a perfect 4-of-4 shooting from the field.  Will Fonseca buried two inside drives to lead the way.  CSI rapidly cooled off however which gave way to the Titans making a 14-5 run to bring the score within four. Brandon Domenick buried two three’s to help pace the visitors.  The Dolphins got a boost when Frank Schettino made his first appearance in five games.  Schettino scored four points in his six minutes of action in the first half and tallied two assists.

The Titans whittled the CSI lead to just a pair, 20-18, with 8:06 to go in the first frame, but in a recurring theme on the night, CSI pulled back ahead, led by a four-point play by Khari Rollock, a three by Vincent Dacunto and another pair of freebies by Thomas Delahanty.  CSI was able to pull ahead by 10, but a three by A.J. Grant, and a late lay-in by Coty Gander pulled the Titans to within 42-37 at the break.

The men amassed 23 free throws in the first half and converted 16 of them which allowed the Dolphins to keep the lead. Westminster’s Cameron Pozsgai continued to find the bottom of the basket which is the reason the Dolphins’ large early game lead dissipated.

CSI led wire to wire in the second frame, but not without a few tense moments.  Matt Getsy cut CSI’s lead to three early, but CSI powered back up by 9 on a Will Fonseca three-point play with 14:13 to go.  A 9-2 WC run put the Titans back to within a bucket four minutes later, but the teams traded points from there until ultimately  another inside drive by Fonseca and a three-point play by Delahanty put CSI again up 9, 69-60, with 5:28 left.  That started a 12-0 run by the Dolphins, putting the game out of reach down the stretch, as Westminster shot 0-5 with a pair of turnovers over a four-minute stretch.  Two late three’s by the visitors pulled them in closer, erasing a monster 18-point lead by the Dolphins, their biggest of the game.

CSI was led by Fonseca’s 21 points, adding 9 rebounds.  Powered by an 8-8 performance from the free-throw line, Delahanty finished with 16 points and a game-high 11 rebounds.  Rollock finished with 10 points.  Cameron Pozsgai led the way for Westminster with 18 points and 9 rebounds, while Domenick added 15 markers all from beyond the arc.  CSI shot 42.9% while WC finished at 39.3%.  CSI controlled the boards, 42-38, and were a plus-1 in turnovers.

?The Dolphins will match up against SUNY-Canton, who out-dueled Connecticut and pulled away very late in an 85-82 victory.  The win was their 9th in a row to start the season.  It will be their first ever meeting.