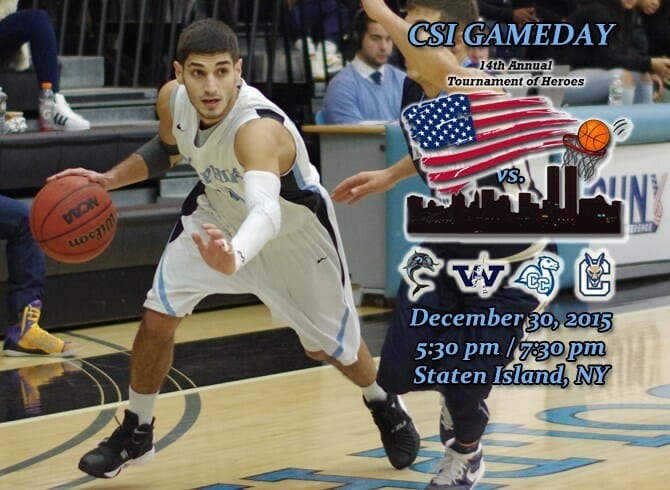 The College of Staten Island’s 14th Annual Tournament of Heroes concludes today with two exciting games at the Sports & Recreation Center.  The action gets underway at 5:30pm, when visiting Connecticut College takes on Westminster College in the consolation game, and then at 7:30pm, the main event is set for SUNY-Canton taking on College of Staten Island in the final.  For the three visiting teams it will mark their first trip to Staten Island to take part in the celebrated event named for heroes Terrance Aiken, Scott Davidson, and Tom Hannafin, all former Dolphins who perished during the terrorist attacks on the World Trade Center on September 11, 2001.

14TH ANNUAL TOURNAMENT OF HEROES AT-A-GLANCE
Matchups: Game One: Connecticut College ( 5-2 overall, 0-0 NESCAC) vs. Westminster College ( 2-7 Overall, 2-1 PAC.); Game Two:  SUNY-Canton (9-0 Overall) vs. College of Staten Island (7-2 Overall, 3-0 CUNYAC)
Where:  Sports & Recreation Center, 2800 Victory Boulevard – Staten Island, NY
Tip-Off: Game One: 5:30pm; Game Two: 7:30pm
Live Video: http://www.csidolphins.com/CSISportsNet
Ticket Info: $5 – General Admission; $2 – Children (10-18); FREE – Children 10 and under
SUNY-Canton Notes: After having double-digit wins in back-to-back games the Roos had a hard fought victory against Connecticut College.  SUNY-Canton had the #1 defense in the country in opponents field goal percentage but the Camels ignored that and shot 50% from the floor.  Sam Annorh was unstoppable against Connecticut College as he shot 8-14 from the floor and dropped 28 points.
Connecticut Notes:  The Camels had dropped their first two games of the season but quickly found their groove and won five in a row.  That streak was snapped last night in a three point loss to the undefeated Kangaroos in a thrilling contest. Zuri Pavlin had a season high 26 points for the Camels as he was able to exploit the interior defense and convert high percentage shots.
CSI Notes: Senior Will Fonseca is averaging 21.5 points per game, ranked 42nd in the nation.  He comes into tonight’s final with 1,287 career points, 21 behind Rommel Santos for 17th all-time at the College.  CSI ranks tops in CUNY and is 18th nationally in three-point shooting at 41.6%, their highest total in single season history thus far.  The Dolphins are averaging 86 points in their six wins, next to just 60.5 in their two losses.  CSI is 12-15 all-time in Tournament of Heroes play, which includes a 8-6 mark in opening round play. Frank Schettino made his return from injury last night and scored four points and recorded five assists. The Dolphins have only won the Tournament of Heroes once and that was back in the 2013 season where they defeated Randolph 59-58.
Westminster Notes:  After breaking their five game losing streak with two win, the Titans have now lost two in a row. The Titans were in most of the game against the Dolphins after a slow start but Staten Island was eventually able to pull away at the end of the game to secure a spot in the final. Cameron Pozsgai scored 18 points against the Dolphins on 6-11 shooting and was able to grab 9 rebounds.