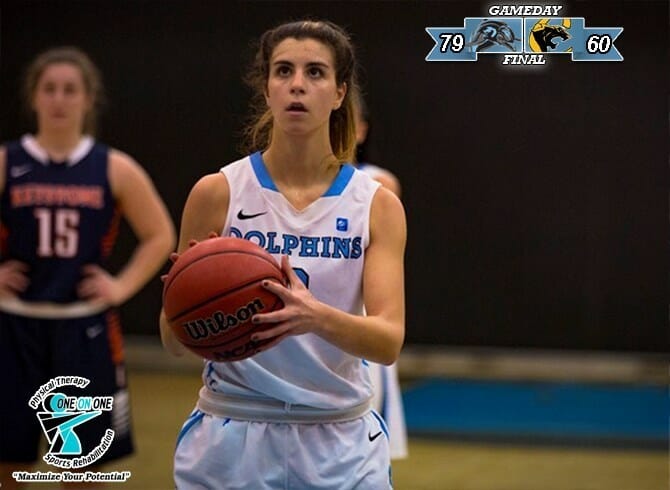 The College of Staten Island women’s basketball team stayed sharp on Friday, powering to a 79-60 win over Medgar Evers College on the road as part of CUNYAC play.  The Dolphins improved to 10-6 overall and 6-2 within the conference, while the Cougars fell to 1-14, 1-7, respectively.

The key to the big win was a great start for the Dolphins, who went ahead early and never looked back, leading by double-digits most of the way.

It took some time for the Dolphins to get uncorked, as MEC grabbed an early 10-7 lead, as the Cougars got five points each from Danyelle Foster and Elesha Dieudonne.  Two straight jumpers by Samantha Flecker, however, put CSI back up, and after trading baskets, the Dolphins used a big, 13-0, run in the final 3:09 of the first quarter to take a 32-17 lead to close the frame.  Flecker added another two lay-ups and Christina Pasaturo drained a three to end the stanza.

CSI extended to as much as a 19-point lead in the second half on another Pasaturo three, and CSI took a 49-32 lead into the lockers.  It was more of the same in the second half.  A three-point play by Foster cut CSI’s lead to 61-50 at one point, and Medgar would cut the lead to 10 with 7:41 to go.  But CSI stayed the course, getting a three-point play from Victoria Gallinaro to surge forward.

CSI was led by Pasaturo’s 26 points, adding seven rebounds and seven assists. Flecker topped out at 20 points and 10 rebounds for a double-double.  Gallinaro added 10 as CSI shot 45% from the field and 38% from the arc.  MEC was led by Nia Tompkins’ 20 points, while Foster added 19 points and a healthy 16 rebounds.

?Up next for CSI will be a date with Hunter College at the Sports & Recreation Center on Wednesday, January 20, at 5:30pm.