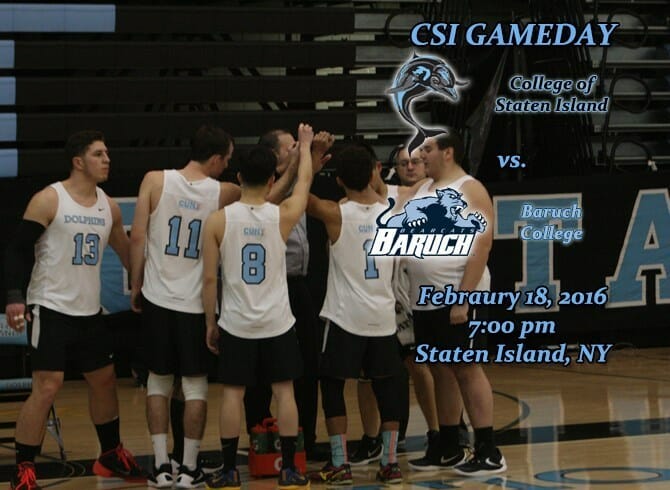 The College of Staten Island men’s volleyball squad has now put together a three match win streak with their most recent 3-1 win over St. Joseph’s College – BK.  The Dolphins will certainly have their hands full with perennial power Baruch College in a CUNYAC showdown.  First serve is set for 7:00pm at the Sports & Recreation Center where the Dolphins will look to upset the Bearcats for their fourth straight win.

CSI vs. BARUCH COLLEGE AT-A-GLANCE
Matchup:  CSI (3-5 overall, 2-3 CUNYAC) vs. Baruch College  (5-5 Overall, 4-1 CUNYAC)
Where:  College of Staten Island, 2800 Victory Blvd, Staten Island, NY
First Serve: 7:00pm
Live Video:  www.csidolphins.com/CSISportsNet
All-Time Series: Baruch leads  3-0.
Last Year’s Result:  CSI lost twice, 0-3, 0-3
Players To Watch (CSI):   The Dolphins’ best two hitters, Danil Kukovitskiy and Justin Edwardsen will need to bring their A-game against the Bearcats to find open spots on the court.  Kukovitskiy and Edwardsen lead the Dolphins in kills with 58 and 59 respectively and will need every one of them tonight against the Bearcats.  Brandon Lei will need to tighten up his passing as he is coming off a match where he had eight ball handling errors called against him.
Players to Watch (BC):  The Bearcats are led by Stephen Roach with 102 kills on the year.  Allowing him to put up those great numbers is Scott Standring who currently leads his team and the CUNYAC in assists with 248.  The Dolphins will need to Kukovitskiy to do his best at the net to stop Roach from getting free shots into the Dolphins’ defense.
News and Notes: The men have won three matches in a row for the first time in program history and will look to extend it to four in a row tonight. Tonight’s match will be the forth meeting between these two teams with the Bearcats holding a 3-0 edge over the Dolphins.  CSI is 1-1 when they