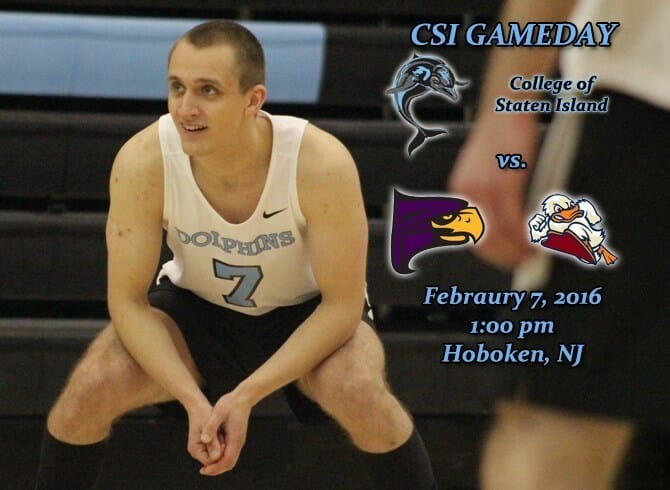 After kicking off the season yesterday, the College of Staten Island men’s volleyball team will be right back at it today, travelling to Hoboken, NJ for a tri-match featuring Hunter College and Stevens Institute of Technology.  Play starts at 1pm for the Dolphins against CUNYAC-rivals Hunter College in a match that will not count in the CUNYAC standings.  CSI will then play hosts Stevens at 3pm.

CSI vs. HUNTER COLLEGE & STEVENS INSTITUTE AT-A-GLANCE
Matchup: CSI (0-2) vs. Hunter College (3-1) / Stevens Institute of Technology (4-1)
Where:  Walker Gymnasium – 1 Castle Point Terrace. Hoboken, NJ
Tip-Off:  1:00pm vs. Hunter / 3:00pm vs. Stevens
Live Stats: http://www.sidearmstats.com/stevens/mvball/?
Live Video:  http://portal.stretchinternet.com/stevens/?
All-Time Series: Hunter leads 3-0, Stevens leads 1-0
Players To Watch (CSI): Yesterday Danil Kukovitskiy led all scorers for CSI with five kills, while Ronald Tisbe led in digs with seven.  Look for both to be big contributors today as well as CSI hopes for better results.
Players to Watch (Hunter): Ben Crusinberry is one of the league’s best attackers on the front line, and has already accumulated 53 kills going into the weekend, good for nearly three per set.  Teammate Blake Hogan is also off to a fast start and is second on the team in kills.  Steven Targuinio and Daniel Dobrogowski already have 18 blocks apiece for the soaring Hawks
Players to Watch (Stevens): Blake Shankweiler and Chris Vaughan have been great at the front line this season and share the team lead in kills heading into the weekend.  Vaughan is also one of the leaders on the back line in digs and blocked shots.  Look for Niko Lambert to be active on the back line as well.
News and Notes: CSI was unable to take a set off of either Hunter or Stevens last year in the four total matches they played against them.  The game against Hunter will be a rematch from the CUNYAC Quarterfinal played last year at Hunter, a 3-0 win for the Hawks.