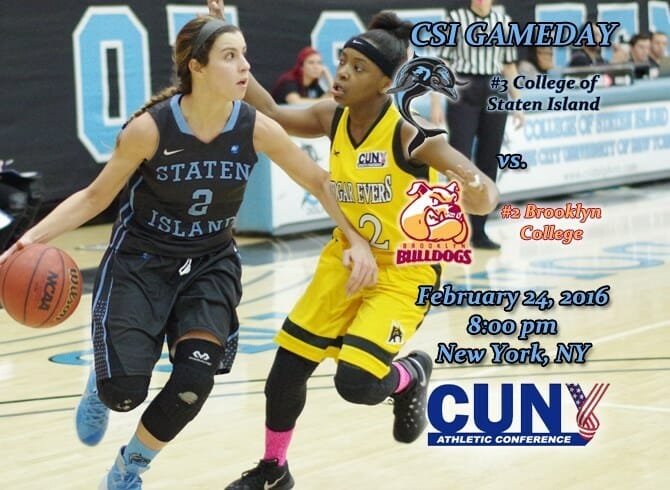 The College of Staten Island women’s basketball squad continues their run towards a championship tonight, and will face off with Brooklyn College as part of the CUNYAC / Army ROTC Women’s Basketball Postseason Championship Tournament Semifinals.  Tip-off is scheduled tonight at 8pm at the Nat Holman Gymnasium at City College of New York.  The two teams finished as CUNYAC Regular Season Champions with Lehman College, who also play tonight against CCNY at 6pm.

CSI vs. BROOKLYN COLLEGE AT-A-GLANCE
Matchup: CSI (18-7 overall, 13-3 CUNYAC) vs. Brooklyn College (18-7 Overall, 13-3 CUNYAC)
Where: Nat Holman Gymnasium – 160 Convent Ave. – New York, NY 10031
Tip-Off: 8:00pm
Ticket Info: http://www.eventbrite.com/o/cuny-athletic-conference-2862211205
Live Stats: http://www.sidearmstats.com/cuny/wbball2/?
Live Video: http://www.csidolphins.com/CSISportsNet
All-Time Series: CSI leads 34-15
This Year’s Result: Brooklyn won 63-57 / CSI won 65-56
Players to Watch (CSI): CUNYAC All-Stars Christina Pasaturo and Samantha Flecker continue to lead the way for CSI, combining for over 33 points per game for the Dolphins.  Pasaturo is fast approaching the CSI single season record for assists.  Pasaturo’s 163 are currently third all-time, and are 15 behind all-time leader’s Tara Gagliardo’s mark of 178 set in 1999-00.  Pasaturo’s 452 points this season are the 16th-highest in single season history, and the sophomore stands 113 points away from 1,000 for her career.
Players To Watch (BC): Olivia Colbert paces the Bulldogs in scoring, averaging 14.8 points per game, pouring in 11.1 rebounds per game as well.  She was a major force in BC’s win over CSI earlier this season.  Taylor Gallagher is second on the squad with 8.6 points per game and Justine Vento follows with 8.1 and a team high 64 three-pointers.  Karen Mak is a major distributer, tallying a team best 123 assists.
News & Notes: CSI vs. Brooklyn has normally been a very defensive series.  Barring overtime, the Dolphins have not scored over 70 points against Brooklyn in the last 17 games dating back to the 2008-09 season.  The Dolphins have won their last 11 games this season when scoring more than 70 points this season.  On Saturday, the Dolphins held Hunter to just 49 points, and that bodes well for a Dolphins team that has now won their last 51 games when holding the opposition to under 60 points, a run that includes their regular season tilt against Brooklyn this season…Forcing turnovers has also been the team’s calling card this season.  The Dolphins are a +8.1 in turnovers per game, and the Dolphins are 10-2 in games where they force 24+ turnovers.  The Bulldogs will need to protect the basketball, as they have turned the ball over 25 or more times on eight occasions this season, going 3-5 in those contests.  Contesting shots will be at the forefront for both teams tonight.  The Dolphins are allowing just 35% from opponents this season.  It’s proved to be a magic number, as the Dolphins are 15-0 this season when holding opponents to 35% or lower in games this season, and are 3-8 when they do not.  BC is just as potent, they are 16-3 when holding opponents below 35% and are just 2-5 when they do not.