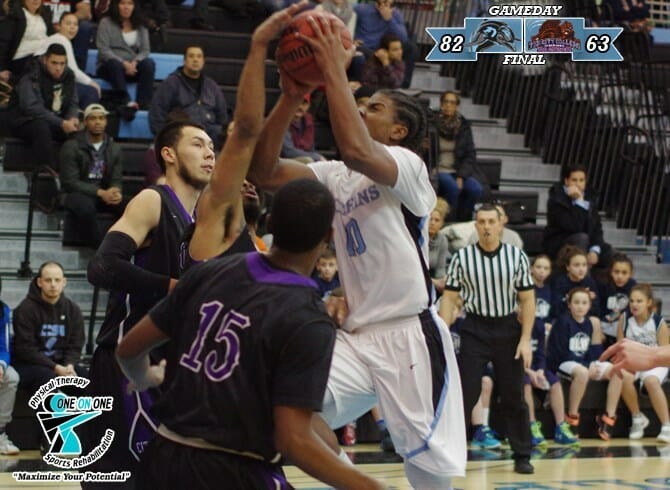 The College of Staten Island men’s basketball team won their third straight and for the eighth time in the last 9 games, exacting revenge on an earlier season loss to City College of New York, with an 82-63 win at the Nat Holman Gymnasium this evening as part of CUNYAC play.  The Dolphins improved to 16-5 overall and 9-3 within the conference, while the Beavers fell to 11-10, 6-7, respectively.

Despite the lop-sided final score, the match-up between the two sides was well-contested most of the way.  In a stop-and-start first half, both teams spent time struggling from the floor and at the free-throw line, with both teams clamping down defensively in what amounted to a 31-30 CCNY edge at intermission.  CSI led by as many of six points on two occasions, using lay-ups by Thomas Delahanty and Greg Civiletti to open the lead.  CCNY quickly responded, however, using a 9-0 run to take back the lead, powered by a three-pointer by Che McCoy.

Consecutive lay-ups by Kevon Murphy popped CSI back up in the stanza, Down the stretch it was CCNY, however, that jumped back on top, using another McCoy bucket and another set of free-throws by Khalil Hamer to secure their modest one-point edge.

To introduce the second half, CCNY jumped out to a four-point lead, but the Dolphins powered back, going on a 17-8 run over five minutes to grab a 51-46 lead at 11:18.  Will Fonseca extended the lead to double digits at 7:56, part of a dominating second half performance.  From there, CSI was able to weather several CCNY attempts at a comeback, and despite the Beavers being able to pull to within 11 points, the Dolphins finalized on a 10-2 run to close the game with their biggest lead, 82-63.

The Dolphins outscored CCNY in the second half, 52-32, aided by Fonseca’s 17 second-half markers.  Fonseca finished with 23 points and 10 rebounds, while Frank Schettino notched 19 points, seven rebounds and four assists.  Coming off of the bench, Murphy added a healthy 14 points and five rebounds, while Civiletti popped in 11 points and four rebounds.  CCNY was guided by Hamer’s 24 points, a mark that included a 12-of-16 mark from the free-throw line.  Mark Richards added 10 points.

CSI out-rebounded CCNY, 39-37, and shot a healthy 53.4% from the floor while holding CCNY to a chilly 37.1%.  For the Dolphins it was their sixth straight win at the Nat Holman Gymnasium against CCNY.

The win catapulted CSI back to the top of the CUNYAC standings in a tie with Lehman College.  The Dolphins will look to continue the pace when they host York College on Saturday at 1pm.