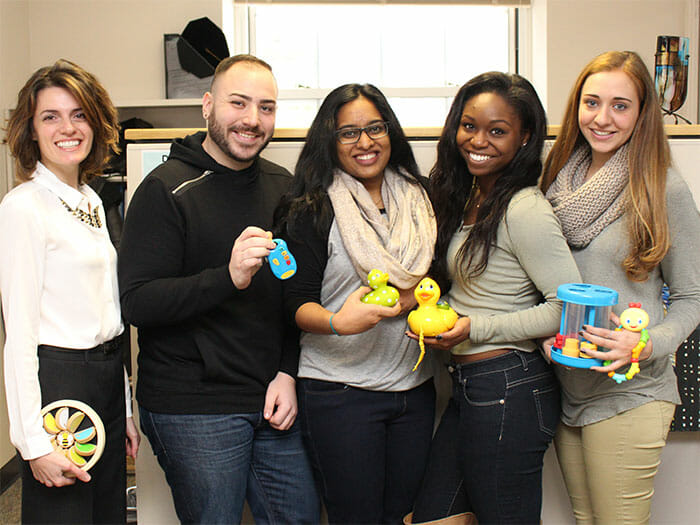 College of Staten Island Professor of Psychology, Dr. Lana Karasik, and her research colleagues published a study last year in the Journal of Cross-Cultural Psychology in which they describe group differences in infants’ sitting ability, opportunity to practice sitting, and mothers’ support of infants’ skills in five-month-olds from six cultures: Argentina, Cameroon, Italy, Kenya, South Korea, and the United States. Instead of testing babies in a psychology lab, researchers observed the infants in their homes: A researcher local to each of the six cultures visited mother and baby pairs in their homes for one hour.

Although Dr. Karasik and her colleagues Dr. Karen Adolph, Dr. Catherine Tamis-Lemonda (NYU), and Dr. Marc Bornstein (NICHD) discovered that one third of the infants were able to sit independently, they also noticed significant cross-cultural variation. For example, only two U.S. infants and none of the Italian infants displayed independent sitting, but eight Kenyan and 11 Cameroonian infants were able to sit. Many inferences can be made based on these early results, although no conclusions can yet be drawn. “It’s tempting to infer that the cultural parenting practices in Kenya and Cameroon may have encouraged some of the infants in those cultures to acquire more precocious sitting abilities,” explained Christian Jarret, writer for BPS Research Digest, “but of course this was a purely observational study with small samples, and we don’t know whether the infant’s abilities influenced their parents’ behavior or vice versa.”

More broadly, findings from this study offer new insights into the remarkable range of ability, varied opportunities for practice, and contextual physical and social factors that influence the proficiency of infants’ skills. “Had we not looked beyond onset ages, ventured beyond the laboratory, and studied samples of infants from six cultures across the globe,” Dr. Karasik said, “we would never have known that at five months, some infants can safely sit on high benches for extended periods without the support of adults nearby.”

Funded by her second National Science Foundation (NSF) grant, Karasik and co-principal investigators Dr. Karen Adolph and Dr. Catherine Tamis-LeMonda with New York University, continue their cross-cultural work. The aim of the project is to examine effects of early experience and restricted movement on infant and child development. The $600,000 NSF award for the project entitled “RUI: An Investigation of Short and Long term Effects of Cradling on Development,” runs through July 2018. The project uses longitudinal sampling to examine concurrent effects of restricted movement on motor skills in infancy in 12- to 20-month-olds and long-term consequences at three to five years of age. This work will also provide insights into cascading effects of infant motor skills on development in other domains such as interactions with objects and people.

“Professor Karasik is breaking new ground in the study of infant behavior,” remarked Nan M. Sussman, Dean of Humanities and Social Sciences, and Professor of Psychology. “The majority of psychological research examines adult behavior in a restricted laboratory setting in a Western country. The wide range of possible human behaviors is overlooked using this paradigm.”