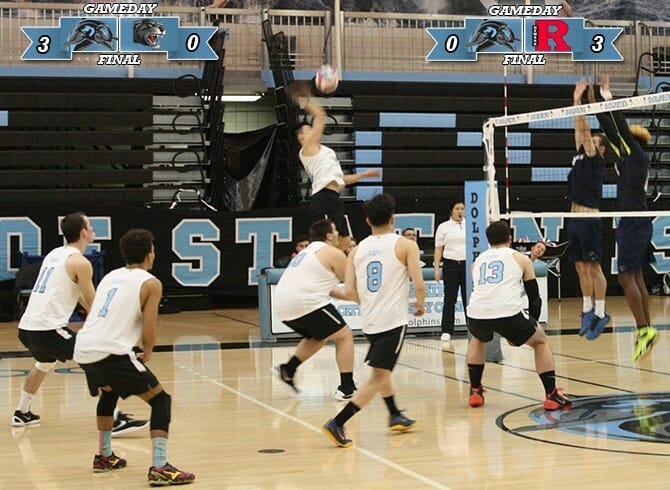 The College of Staten Island men’s volleyball squad took on No. 5 Rutgers-Newark in the first game of the afternoon as part of a Staten Island hosted tri-match.  The nationally ranked Raiders would quickly dispose of the Dolphins in three sets (8-25, 7-25, 4-25) to drop CSI to 3-7 overall.  The Raiders would improve to 13-1 overall followed by another dominating performance against Rust College to sweep the tri-match and leave with a 14-1 overall record.  The Dolphins would close out the tri-match against Rust College with a 3-0 sweep (25-6, 25-7, 25-4) to finish the day 4-7 overall while the Bearcats dropped to 0-7.

Staten Island was able to get a 1-0 lead over the Raiders after a Cody Chidsey was blocked by CSI’s leading blocker Danil Kukovitskiy.  The Dolphins however would quickly fall behind as the Raiders settled into the match. Rutgers-Newark would go up 11-5 before scoring another five unanswered to take a 16-5 lead over the Dolphins.  Rutgers was too much for the Dolphins to handle as they didn’t have the height to send to the net to block the attackers which allowed free shots at the Dolphins’ defense.  The Raiders hit .667 as a team in the first set after acquiring 11 kills on just one error.  The Dolphins hit -.059 as a team with six kills and seven errors.

Set two was much of the same as the Dolphins were able to keep it in reach for the early part of the set until the Raiders’ serves started coming at the Dolphins very quickly.  CSI was unable to properly defend a serve as each pass went right back to the Raiders which was quickly spiked down into the court.  The Dolphins would find themselves down 15-7 and were unable to get past seven as Rutgers scored the final 10 points of the set unanswered.  The Raiders’ hit percentage would fall in the second set to .647 after committing two errors with 13 kills.

The final set against the Raiders was the biggest gap out of any of the sets.  CSI would fall 25-4 in the final set after not being able to get anything going against the Raiders.  Every attack the Dolphins sent towards Rutgers was either blocked or called an error.  Rutgers was very efficient this game with 11 kills and no errors on 12 attacks for a hit percentage of .917.  CSI once again had a negative hit percentage at -.071 with four kills and five errors on 14 attacks.

Justin Edwardsen acquired seven kills and two errors on 13 attacks in this match while Brandon Lei led the way in assists for the Dolphins with 13.  Rutgers’ serves were a problem for the Dolphins all day which turned into 16 receiving errors.

The Dolphins fared much better against the Bearcats of Rust College in the final match of the afternoon.  Rust College would jump out to a 1-0 lead over the Dolphins with an ace.  CSI would answer with eight straight points to go up 8-1. Rust would score two more points before the Dolphins rifled off a 8-0 run to give themselves a 16-3 lead. The Dolphins would finish off the set with Steven Caruso recording two aces to take a 25-6 victory.

Once again CSI dominated the second set and was up 13-3 midway through the set.  The Bearcats looked like they were putting together a run but the Dolphins squandered their comeback for it could get started.  Zain Ali would record his first kill of the season in this set to give the Dolphins a 24-7 lead before Edwardsen would hammer home the sets final point.

Adil El Haddad started the final set of the afternoon with eight straight aces to start the Dolphins with a nice lead.  CSI would have an 11-0 lead before the Bearcats were forced to call a timeout to try and stop the Dolphins’ hot streak. The timeout would prove to be successful as El Haddad’s next serve would find its way into the net for the first point for the Bearcats.  Staten Island would go on to handily win 25-4 the biggest spread of the match.

The Dolphins set a new record with 31 aces in the match. Kukovitskiy led the way with 5 kills on 10 attacks while Lei once again led the way with 10 assists.  Caruso also recorded his first career solo block in this game.

The men will return to action on Thursday, February 25 where they will take on Pratt Institute at 7:30 PM at the CSI Sports & Recreation Center.