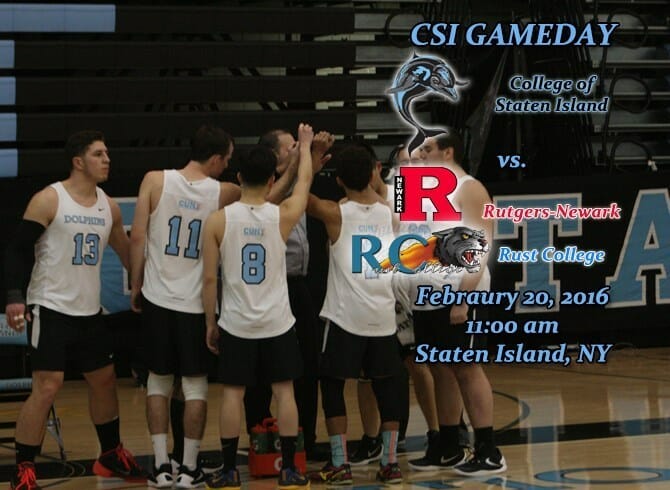 The College of Staten Island men’s volleyball team is back in action this afternoon after coming off of a tough loss to CUNYAC opponents Baruch College.  That loss snapped the longest win streak in program history , three wins, and dropped them to 3-6 overall and 2-4 in the CUNYAC.  This afternoon the Dolphins will host a tri-match and face off against No.5 Rutgers-Newark in the first match of the day, and conclude against Rust College at 3:00 pm.

CSI vs. RUTGERS-NEWARK & RUST COLLEGE AT-A-GLANCE
Matchup:  CSI (3-6 overall, 2-4 CUNYAC) vs. No. 5 Rutgers-Newark  (12-1 Overall, 3-1 CVC) & Rust College (0-5 overall)
Where:  College of Staten Island, 2800 Victory Blvd, Staten Island, NY
First Serve: 11:00 am
Live Video:  www.csidolphins.com/CSISportsNet
All-Time Series: Rutgers Newark leads CSI 1-0.  First meeting against Rust College
Last Year’s Result:  CSI lost once to Rutgers, 3-0.
Players to Watch (CSI): Song Shin Low has been playing well this season and has racked up 44 kill, good for third on the team, while also moving the ball and tallying up 44 assists, good for second on the team behind only Brandon Lei.  Danil Kukovitskiy has been outstanding at the net this year as he has blocked 31 down for points.  Opposing teams always try to find a way to avoid him but Kukovitskiy will do his best to get in the way and alter the shot.
Players to Watch (RUN): Travis Mintzer leads the Scarlet Raiders with 135 kills on 260 total attacks through 13 matches.  His teammate Corey Pieper is close behind him with 127 kills and 20 blocks.  Staten Island will have trouble finding their way around blocker Nick Kuti who has tallied a massive 56 blocks so far this season.
Players to Watch (RC): Jadarrius McKinley leads the Bearcats this season with seven kills through five matches and will certainly look to get going early and often against the Raiders and Bearcats.
News and Notes: Today marks the first time that either Staten Island or No. 5 Rutgers-Newark will take on Rust College.  Rust College is coming all the way from Holly Springs, Mississippi to take part in this tri-match and will then take on No. 6 Steven Institute on Sunday before heading back down to Mississippi.  The Scarlet Raiders opened their 2016 campaign on a eight win streak which was eventually snapped by Stevenson University.  Since then the Raiders have put together a four match win streak and only lost one set over that span. The Dolphins have been playing well as of late and have won three of their last four matches and will hope to get back in the win column today.