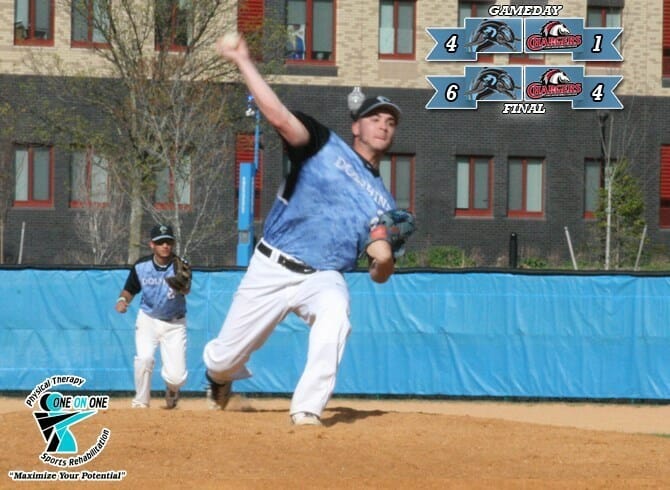 The College of Staten Island men’s baseball squad concluded their spring training trip to Myrtle Beach, SC, on a high note, turning back Lancaster Bible in a pair of games on Monday, 4-1, and 6-4, as part of the Cal Ripken DIII Experience.  The wins lifted CSI to 5-1 overall while the Chargers dipped to 2-5.  It marks the first time the Dolphins have left their trip with an above .500 record since attending the showcase beginning in 2010.

In the opener, CSI used another strong pitching performance, this time from Josh Bernstein, who went six solid innings, surrendering a lone run on six hits, fanning four while walking none.  Gerard Esposito got the save.  Offensively, CUNYAC Player of the Week George Kantzian stayed red-hot, lacing a pair of RBI-doubles.  Phil Ciprello added the final insurance tally with an RBI-single that plated Kantzian in the fourth inning.  From there, CSI closed the door on the hill, as Bernstein and Esposito combined to allow just two base runners in the final four innings.

The Chargers got the upper hand early in the second game as Justin Taylor roped a two-run homerun in the first inning off of CSI starter Chris Kambach, but the CSI hurler settled down and tossed four scoreless innings from there, and in the fourth, CSI exploded for five runs.  The runs came all unearned and with two outs, highlighted by a Nick Delprete two-RBI single that scored Chris Moran and Anthony Dimarco.  Esposito came in again in relief trying to record a two inning save after Kamback gave up two in the fifth, and Esposito stayed perfect, retiring six straight to preserve the win.

CSI will next play this weekend, when they host St. Joseph’s College (BK) on Saturday and Yeshiva University on Sunday for 12 Noon doubleheaders.