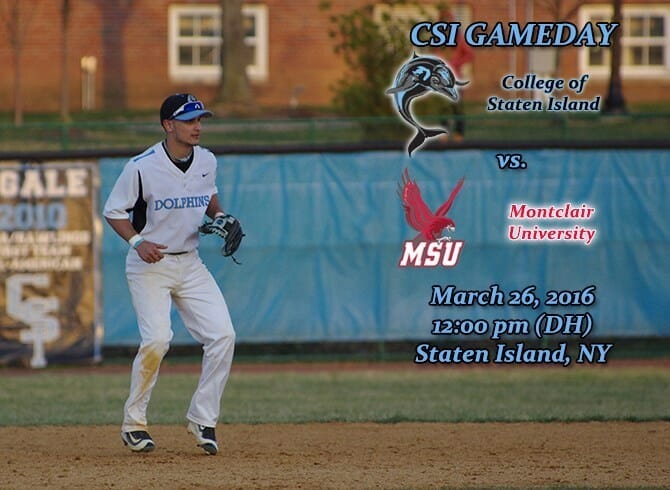 The College of Staten Island baseball squad is back in action today against Montclair State University in a doubleheader starting at 12:00 pm at the CSI Baseball Complex.  The Dolphins come into today’s doubleheader looking to get back on the winning track with a pair of wins.

CSI vs. MONTCLAIR AT-A-GLANCE
Matchup:  CSI (8-6 overall, 0-0 CUNYAC) vs. Montclair (8-6 Overall, 0-0 NJAC)
Where:  CSI Baseball Complex – 2800 Victory Blvd., Staten Island, NY
First Pitch: 12:00 pm
All-Time Series: Montclair leads 6-1
Last Year’s Result:   Did not play
Players to Watch (CSI):  Nick Delprete is having a fine senior season so far and is leading the Dolphins with a .412 batting average and six RBIs.  Delprete also leads the Dolphins with 40 assists and has only struck out three times this season.  Phil Ciprello gets on base 50% of the time which is more than any other Dolphin, Ciprello has collected 9 RBIs which is third on the team. Josh Bernstein has pitched well for CSI so far this season and boasts a 1.13 ERA through eight innings with four strikeouts and a 1-0 record.
Players to Watch (MSU):  Joe Foote leads the Hawks with a .460 batting average and is second on the team with 9 RBIs.  Foote has committed four errors though 14 games this season which is second highest on the team.  Foote makes up for his infield woes as he gets on base 53% of the time which is higher than any other Hawk. Michael Macchia is 2-0 from the mound this season and has a 1.80 ERA through 20 innings pitched and 11 strikeouts.
News and Notes:  The Dolphins have lost three straight to the Hawks and are coming off of tough 11-inning loss to the Pioneers of William Paterson University on Tuesday.  CSI is hitting .290 as a team this season while holding their opponents to a .265 batting average. The Hawks will come into today’s doubleheader hitting .300 as a squad with a single home run.  The Dolphins have really brought out the bats lately and have hit .320 or better in the last three contests but only have a single win to show for it, as some costly errors put them behind on the scoreboard.