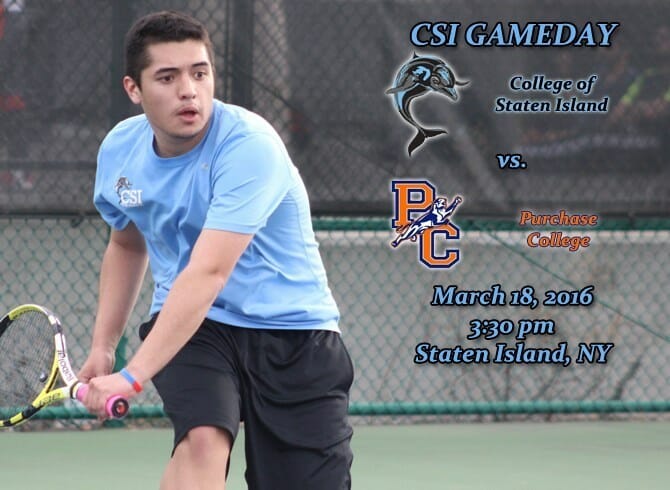 The final College of Staten Island team to open its season will be Men’s Tennis, and the unit will get underway today at 3:30pm, when they host Purchase State College at the CSI Tennis Center.  The Dolphins are coming off of a 10-4 season in 2015, and CSI is sporting a young unit, with just four returning players and five new faces.  Purchase already has four matches under its belt, and sport a 2-2 record heading in.

CSI vs. PURCHASE STATE COLLEGE AT-A-GLANCE
Matchup:  CSI (0-0 overall, 0-0 CUNYAC) vs. Purchase College (2-2 Overall, 0-0 Skyline)
Where:  CSI Tennis Center – 2800 Victory Boulevard, Staten Island, NY
First Serve: 3:30 pm
Players To Watch (CSI): Chris Livoti is coming off of a good freshman season and he will be one of the CSI returnees looking to step up in the lineup and assume a bigger role.  Look for Andrew Adia, a fellow sophomore to also be near the upper half of the lineup.  Matthew Vesci is a new face who the Dolphins think will immediately break into the lineup and be a disruptive force.
Players to Watch (PC):  Joseph Troop is enjoying a fine start to 2016, boasting a healthy 3-1 record at No. 2 Singles so far.  He has also teamed up with Riley Damerell to post a 4-0 record in the top doubles flight as well.  Look for them to try and continue that positive run today.
News and Notes: The last time these two teams faced off was back in 2011, a 5-4 CSI win at the CSI Tennis Center.  CSI had one of their best seasons that year, going 16-5 overall.  The Panthers started out the season 2-0 but have since lost two straight, and have been idle for the past 10 days, most recently falling to Baruch College, 7-2.  After today’s tilt, CSI will actually travel to Purchase College tomorrow for their CUNYAC opener, playing City College of New York at 3pm.