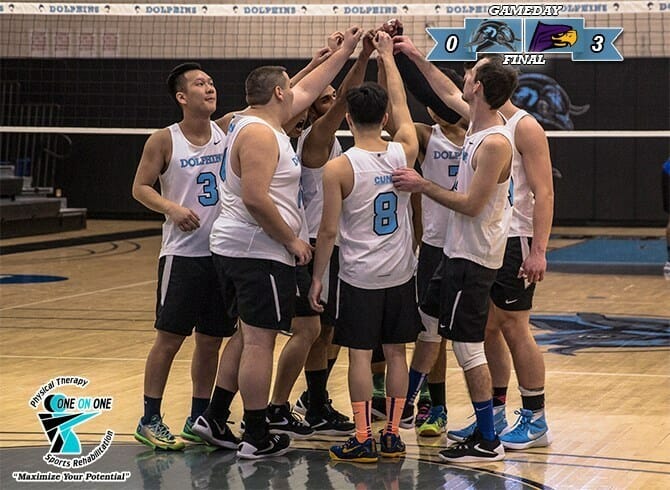 The College of Staten Island men’s volleyball squad saw their season-long losing streak extend to 9 games, falling is straight games to Hunter College, who remained undefeated in CUNYAC play.  The Hawks won by scores of 25-11, 25-17, & 25-10.The Dolphins fell to 4-16 overall and 2-10 in the CUNYAC with the defeat, while the Hawks lifted to 18-7, 12-0, respectively.

CSI took a modest 3-1 leading the first set before Hunter went on an 8-0 run to take control thanks to the service of Steven Tranquinio.  The Hawks went on to go on another 9-0 run later, and won the game thanks to eight Blake Hogan.  In the second set, CSI was more spirited, and spread out eight kills after just two in the first set.  Still, the powerful Hunter attack at the front on the net, combined with great defensive play in the back, helped break open the set midway, forcing CSI to call for a timeout down 17-9.

In the third set, the Hawks used great serving and the power of Ben Crusinberry to cruise to a 25-10 winner.  Khaleeq Baum registered three kills in the stanza for CSI but it was not enough.

Leading the way for Hunter was both Crusinberry and Hogan, who finished with 9 kills apiece.  Tranquinio led the way with four service aces while Nicolas Sanchez scattered 26 assists and a team-high five digs.  CSI was led by Baum’s four kills while Brandon Lei scattered 11 assists.  Steven Caruso led the Dolphins with six digs.

The Dolphins will be back in action on Saturday for a tri-match at Medgar Evers College.  They will play Rust College at 12 Noon, followed by Medgar Evers, at 4pm.