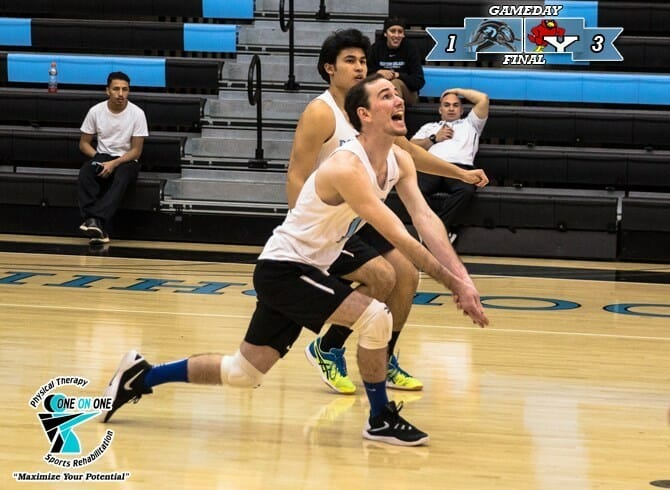 The College of Staten Island men’s volleyball squad returned to CUNYAC action tonight against York College after a five match non-conference stretch.  The Dolphins would go on to lose their third straight match tonight after a 3-1 (24-26, 25-18, 24-26, 18-25) loss to the Cardinals for the first time in program history.

The Cardinals took the opening set 26-24 in a close back-and-forth set that was knotted up at 24 before York was able to pull away after a Justin Edwardsen service error. After falling behind 4-9 early in the set the Dolphins were able to rally back with a 10-1 run to give the Dolphins a 14-10 lead that caused the Cardinals coach to call a timeout.  The timeout was just what the Cardinals needed to get back in the set and take the lead from the Dolphins. The Cardinals would finish off the set with a kill by Larry Moore.

The Dolphins were able to tie the match up at 1 when they took the second set 25-18. After leading by only two midway through the set, Staten Island would go on a 6-0 run to take a 21-13 lead and would not look back from that point.  Randy Adams would give the Dolphins the win after a service error.

Staten Island would again fight valiantly but would once again see the set slip through their fingers after making an improbable comeback.  The Dolphins were down 17-24 and scored seven straight points led by a great block by Danil Kukovitskiy which was preceded by a kill.  The Cardinals, unfortunately for the Dolphins, would quickly regain composure and secure the final two points they needed to pick up the second win of the match.

CSI jumped out to a 11-7 lead and early on it looked like the Dolphins were going to force a game five but York College had other plans.  York’s timeouts were well placed and iced the Dolphins which would quell their attack and put the ball back in York’s hands.  York would follow the timeout with a 7-0 run and go up 19-13.  The Dolphins were never able to close the gap and saw their first loss to the Cardinals in program history.

The Dolphins are back in action on Saturday when they head to Hunter College for a CUNYAC tri-match where they will try and get revenge against York College and will take on No. 14 Hunter College at 11:00 am.