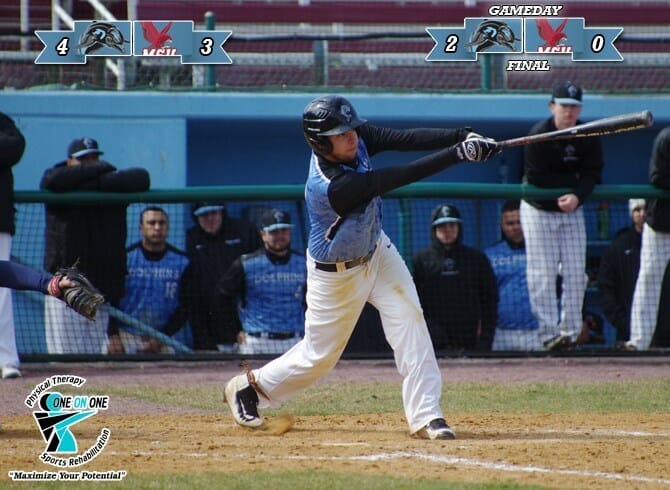 The College of Staten Island engaged in a pitcher’s duel with Montclair State University today in a doubleheader that took place at the CSI Baseball Complex in Staten Island, NY.  Game one of the doubleheader ended 2-0 in the Dolphins’ favor while game two took an extra inning before the Dolphins emerged victorious with a 4-3 win in eight innings of play.  The pair of wins lifted the Dolphins to 10-6 overall while the Red Hawks dipped to 8-8 with the pair of losses.

Frank Smith was once again had a day which he refused to leave his teammates stranded on the bases and led the way with a combined 3 RBIs while going 2-for-6 in the pair of games.  Frank Sconzo was one of the beneficiaries of Smith’s drive to bring in runs as he crossed home plate twice in the doubleheader while going 3-for-5 from the dish.  Tom Musso returned to his winning form this afternoon with a complete game shutout with five strikeouts and only four hits.

The Dolphins were led by a first inning onslaught of offense and the right arm of sophomore pitcher Musso in the 2-0 win over the Red Hawks.  Sconzo got the Dolphins’ offense moving when he stepped to the plate in the no. 2 spot and doubled to left field to immediately put the Dolphins in scoring position with only one out on the board. Joe Palmeri would follow Sconzo’s double with a single of his own to put two Dolphins on base waiting to come home.  George Kantzian, who is known for his power, hit one deep to centerfield but was caught before any Dolphins base runner could get to home plate.

Smith came to the plate with two men in scoring position and two outs on the board and knew he couldn’t leave them stranded on the bags.  Smith waited for his pitch and sent one flying to right center which allowed Sconzo and Palmeri to score the lone runs of the game
.
Musso was able to keep the Red Hawks off of the board for the first time this season as the Red Hawks were able to score at least one run in their 14 games prior.

Glenn Glennerster added two hits for the Dolphins in the first contest while Josh Mercado went 1-for-2 with a pair of assists in the game.

The zeros continued into the second game of the doubleheader until the fifth inning, when Montclair capitalized on two errors by the Dolphins to take a 1-0 lead. After playing a clean game in the game one Mercado fumbled two grounders hit to him which allowed the Red Hawks to get on the board after being blanked in the first game.  Christian Capellan wouldn’t allow the errors by his teammate to bother him as he remained confident in his team and continued to pitch his way out of the inning as he forced the batters to hit soft grounders for easy putouts.

The Dolphins would answer right back in the bottom half of the frame.  Sconzo would reach first via a walk and was advanced to second when Palmeri slapped a single to left field.  Kantzian followed Palmeri with a double just inside the third base line and scored Sconzo and Palmeri to take a 2-1 lead over the Red Hawks.

Both teams would once again go scoreless in the sixth inning.  Montclair, who lost game one, was determined not to lose for the second game in a row.  Keith Murphy hit an RBI single through the left side, spoiling a complete game win for sophomore pitcher, Capellan.  Ryan Kennedy was called upon in the top of the eighth inning as the Dolphins needed a fresh arm on the mound. The Red Hawks would go on to take the lead in the top of the eighth when Justin Epifanio executed a successful suicide squeeze bunt to score Matt Long who had reached on an error by Anthony DiMarco at third base.

Kanzian would once again hit a double off of the left field wall and put the tying run in scoring position.  Smith, as he did in game one, made sure not to leave anyone on base and hit an RBI single to right field to score Jordan Wilson, who came in to pinch run, and tie the game up.  Glennerster followed up with a ground out to the pitcher and it looked like the game was going to continue further into the afternoon.

Senior Phil Ciprello had other ideas.  Ciprello put the team on his shoulders, after having a quite doubleheader, and recorded his only hit of the day when he ripped the ball over Murphy’s head in left field to push across the walk off winner.
Kennedy would get credit for the win and improve to 1-2 overall.

The Dolphins will return to action on Tuesday, March 29, when they head to Wayne, NJ for a revenge game against William Paterson University at 3:30 pm.