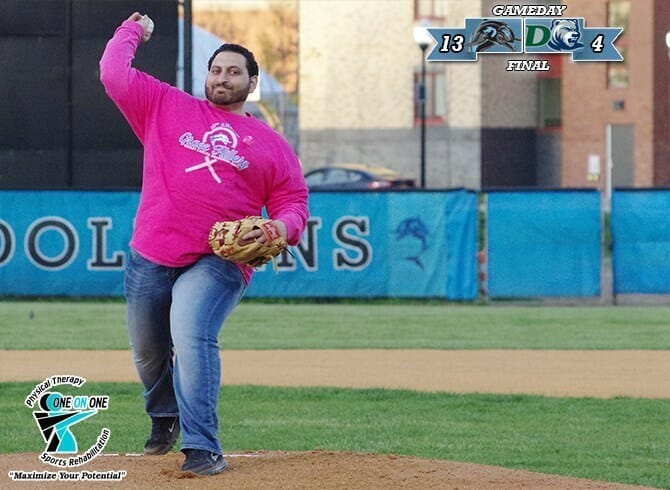 The College of Staten Island men’s baseball squad used a 20-hit performance to advance their win streak up to a season-high eight games, skating past Drew University by a 13-4 count at the CSI Baseball COmplex. More important than the game, however, was the tally in the donation category, as the Dolphins raised a total of over $5,100 in funds to support breast cancer research as part of the 13th Annual Grace Hillery Breast Cancer Awareness Night.

Mother to former Dolphin baseball star Anthony Hillery, Grace Hillery lost her battle with breast cancer in 2004.  Fund-raising primarily for the Staten Island Breast Cancer Research Initiative started early and never stopped at the ballpark, with money generated through T-shirt sales, raffles, 50/50, concessions, and straight donations.  The money raised this year puts the overall total over the past 13 years at over $68,000.

The evening kicked off with the singing of the National Anthem by Staten Island Philharmonic voice John Griffin and was followed with introductions of several key figures, including Hillery and CSI President Dr. William Fritz, Director of Athletics Charles Gomes, CSI coaches Mike Mauro and Neil Barbella and members of the SIBCRI. The introductions were followed by the kick-off donation, made by title sponsor One-on-One Rehabilitation Services in the amount of $1,000, presented by owner Joe Saraceno. Following the initiative, the game’s ceremonial first pitch was offered by Peter Botros, owner of the Stone House Restaurant on Staten Island. Botros was diagnosed with the disease in 2012 at just 26 years of age.  As a survivor, he is active at helping spread the word of early screening for men as well as women.  The former Port Richmond High School baseball star threw a perfect strike to start the game

On the field of play, CSI got into an early hole, but powered for 11 runs in the middle innings, helped along by three Drew errors, and a seven-hit fourth inning.  Frank Sconzo and Nick Delprete stroked two-RBI doubles in the fourth frame, and Frank Smith followed with an RBI triple shortly after.  In the fifth inning.  Joe Palmeri added an RBI-double in the fifth, with Delprete and George Kantzian adding RBI singles as well.

The run support proved plenty for CSI starter Josh Bernstein, who pitched into the eighth inning, earning the win by pitching seven innings, alloweing 9 hits and four runs (three earned) while fanning three.  With CSi up 12-2 after five innings, both teams went to many of their reserve players.  Drew used a total of 24 players in the contest, including six pitchers, as starter David Fouts lasted just 3.1 innings.  The Dolphins used 17 players in their half of the boxscore, with Terrance Mulligan and Jasin Failla earning an inning each in relief.

Palmeri led all CSI players with four hits and two RBI and two runs scored.  Delprete went 3-6 at the dish with three RBI and a pair scored.  Drew’s Anthony Feltre went 3-3 in the leadoff position with a walk and run scored.  The Dolphins turned three double plays in the game.

Win or lose, however, both teams were excited at the opportunity to take part in a higher calling, the charge to strike out breast cancer, one inning at a time.  Raffle prizes were awarded throughout the evening, a majority courtesy of local merchants and Major League Baseball.

CSI skipper Michael Mauro was happy with the event.  “This is something we love to do for Anthony and his family, and really for the entire community that’s affected by this disease.  It’s nice to feel supported and it’s truly a family event, from the people we honor to the people in the stands.  Everyone is here to make the night the best it can be.  We are happy to do it each year.”

The over $5,000 in money raised in 2016 brings the overall tally to over $68,000 since the event was chartered 13years ago, and CSI intends to grow the game each year.  The amount raised included a $500 shot offered by Drew’s baseball squad, which turned over its meal money for the game to the effort, commemorated in a third-inning ceremony with Drew Athletic Director Jason Fein and Head Coach Brian Hirschberg.

CSI is next in action tomorrow, facing off against Ramapo College in a single game on the road at 4:00pm.