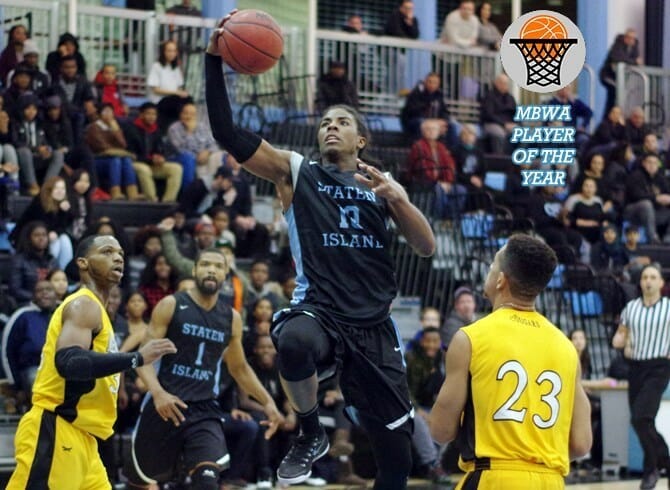 College of Staten Island senior forward Will Fonseca’s list of postseason accolades continues to grow, as CSI’s leading scorer and rebounder in 2015-16 was named Player of the Year by the Metropolitan Basketball Writers Association for the second straight year.  Fonseca is only the eighth NCAA Division III two-time winner of the award, and became the first CUNYAC recipient of a back-to-back honor since Richard Jean-Baptiste in 2009.

Voted on by basketball beat writers and columnists that cover all three NCAA Divisions, Fonseca will be honored at the 83rd Annual Haggerty Awards Dinner on Tuesday, April 12, at the Westchester Marriott in Tarrytown, NY.  Fonseca joins six other CUNYAC stars that comprise the three all-star units and Brooklyn College Head Coach Rich Micallef, who boasts Coach of the Year honors.

Fonseca enjoyed a tremendous senior season to his abridged three-year stint with the Dolphins, posting 608 points, good for 23.4 per game to go with an even 10.0 rebounds and team-leading 25 blocked shots.  He also recorded 65 assists. He ranked 15th nationally with 15 double-doubles and ranked in the CUNYAC top five in 10 offensive and defensive categories, including points, rebounds, and free-throws.

The list of laurels is long and accomplished for Fonseca.  On March 19 he was selected to play in the NABC Division III All-Star Game in Salem, Virginia, on the heels of his first-team All-America selection from the coaches committee.  He took home first team All-Atlantic honors from D3hoops.com, and was the back-to-back CUNYAC and ECAC Metro Player of the Year.

Fonseca is the second Dolphins player to win back-to-back Player of the Year honors from the MBWA, joining Hall of Famer Rob Roesch who won the awards in 1988 & 1989, respectively.  Along with Jean-Baptiste, they join Hunter College’s Jose Rodriguez (1992-93) as the only other two-time winners from the CUNYAC.

The Haggerty Awards Dinner is hosted by both the NIT and the MBWA and is attended by hundreds of guests annually.  The dinner is named after Frank J. Haggerty, a two-sport star who was the first graduate of both Chaminade High School and St. John’s University to die in military service during World War II.