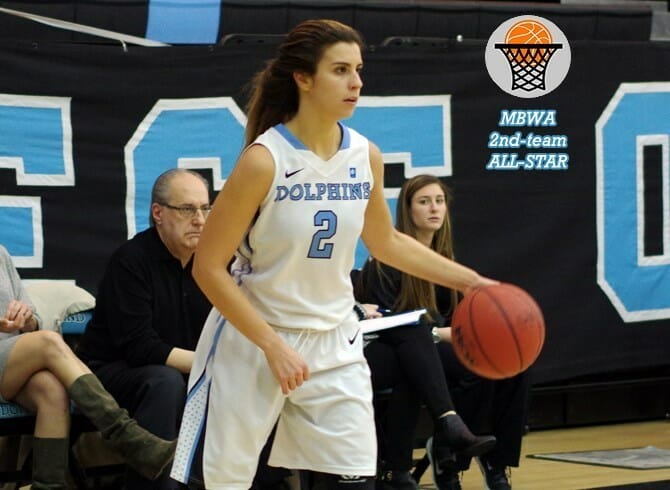 College of Staten Island women’s basketball sophomore Christina Pasaturo added to her growing list of achievements today, as she was selected as a second-team all-star by the Metropolitan Basketball Writers Association.  It is the first honor by the CSI sophomore, who was also cited as a first-team CUNYAC all-star and second-team all-ECAC Metro selection earlier this month.

Pasaturo joins CSI men’s basketball star Will Fonseca as the Dolphins’ representatives on this year’s teams, and they will be honored at the Haggerty Awards Dinner on Tuesday, April 12, at the Westchester Marriott in Tarrytown, NY.  Pasaturo is one of six CUNYAC players comprising the three all-star teams.  Stevens Institute’s Kaitlyn Astel won Player of the Year honors, while Stevens’ Megan Haughey and Montclair State’s Karin Harvey won Co-Coach of the Year honors.

The MBWA awards span as far back as the 1930’s and are made through votes gathered by area basketball reporters and columnists that cover all three NCAA Divisions.  Pasaturo was a sound choice for high honors.  A first-team conference all-star, she led CSI in scoring with 509 points, good for an 18.2 average.  She also led the unit and ranked 5th nationally with 178 assists, averaging 6.4 per game, good for 7th nationally.  On top of that she tallied three double-doubles, registering a triple-double against Baruch College on February 12.

Through two seasons at CSI, Pasaturo stands just 56 points shy of 1,000, and ranks 12th all-time in assists with an even 250.  She also ranks 6th all-time in three-point baskets with 129.

The Haggerty Awards Dinner is hosted by both the NIT and the MBWA and is attended by hundreds of guests annually.