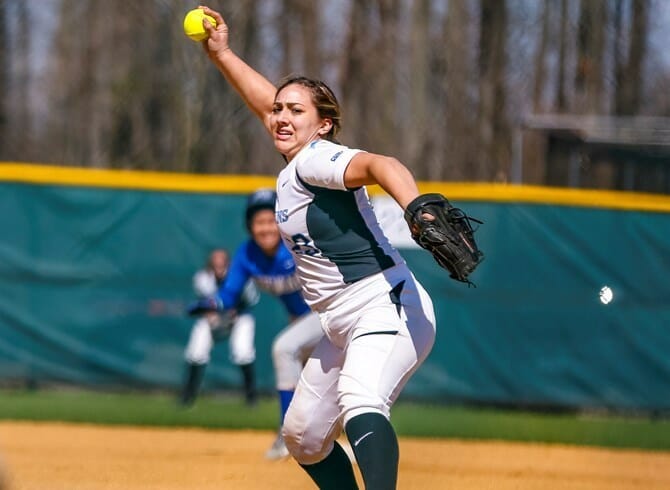 The College of Staten Island women’s softball team has been idle for some time, but when last they played, Nicolette Trapani had a sensational outing against Lehman College, and it merited her Herosports.com’s Defensive Hero of the Week for all of NCAA Division III Softball, as the results of an online vote.  It is the first such honor by any CSI player.

Formerly BennettRank.com, Hero Sports is a ranking agency that ranks all teams in all sports across all NCAA Divisions, as well as awards citations on a weekly and yearly basis.  Trapani was up against four other national defensive stars and was the top vote-getter by accumulating 60% of the overall vote.

Trapani had a lone outing during the week in question, but it was a give-inning no-hitter against Lehman College in what amounted to a 13-0 win.  Trapani was two walks short of a perfect game, but otherwise fanned eight batters to record the victory.  For the season, she has pitched 26 innings, allowing just four earned runs, good for a minuscule 1.08 ERA and a 3-1 overall record.  In four starts, she has four complete games and three shutouts.  She has walked jus6t 9 batters while fanning 22, and opponents are batting just .202 against her.

CSI hopes to return to action on Thursday, April 7, when they host William Paterson University for a 4pm, non-conference, doubleheader.  They’ve had seven of their last eight doubleheaders postponed due to weather.