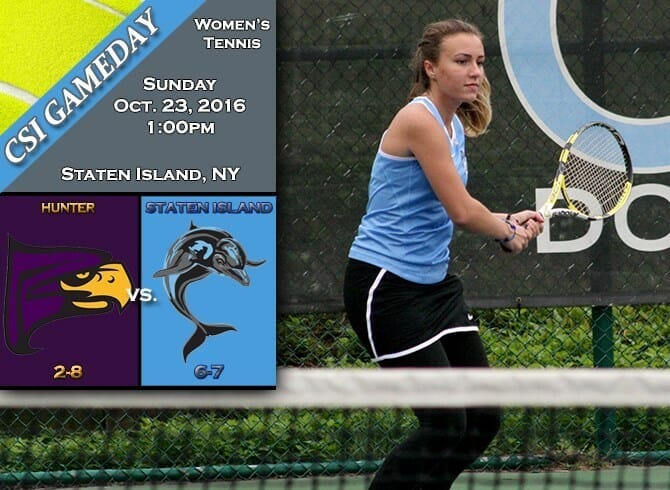 The College of Staten Island will usher in the 2016 CUNYAC Postseason Championship Tournament this afternoon, when they host quarterfinal play at the CSI Tennis Center.  The Dolphins are the No. 3 seeded team in the six team tournament and will host No. 6 Hunter College at 1pm.  In the other quarterfinal today, No. 4 John Jay College will host No. 5 Brooklyn College at 4pm.  The top two seeds, Baruch College and Lehman College have first round byes and will await the winners of these games in Semifinal play on Tuesday.

CSI vs. HUNTER COLLEGE AT-A-GLANCE
Matchup:  CSI (6-7 Overall, 4-2 CUNYAC) vs. Hunter College (2-8 Overall, 1-5 CUNYAC)
Where: CSI Tennis Center – 2800 Victory Boulevard, Staten Island, NY
First Serve: 1:00pm
This Year’s Result:  CSI won, 6-3
Players to Watch (CSI): Freshman Tristiana Adragna has been the player to watch for CSI, as she is on a personal six-match win streak and is sporting a team-best 9-3 singles record.  Fellow frosh Dana Friedman is 4-4 this season and will look to get on the plus side of .500 with a big match today.  Look for top two players Nozima Toshpulatova and Michelle Kushnir to score points near the top of the order.
Players to Watch (HC): The Hawks are having a tough season but Catherine Ng is having a good campaign with a 4-3 overall mark at No. 2 Singles and she will look to stay in form.  Mehriniso Khaydarova and Maria Kogarova have done well as a pair within the CUNYAC in the top doubles spot as well.
News and Notes:  The Dolphins were able to take a 6-3 win over Hunter earlier this season in a match where they were short-handed and without their No. 1 Singles player Toshpulatova, who will play today.  The Dolphins also played that day without Viktoriya Volkova who is due back in the lineup this afternoon.  That should bode well for the Dolphins who suffered two losses in the top singles and doubles spot during the regular season meeting.  These two teams are meeting for the fifth straight year in the CUNYAC Tournament, however, this is the first quarterfinal meeting in that span.  In that span they have swapped tournament wins.  In 2012, Hunter defeated CSI in the CUNYAC Final.  In 2013, CSI returned the favor in the Semifinal Round.  In 2014, CSI beat Hunter again, this time in the final, but last year Hunter got even and defeated CSI in the semifinal round.  The winner of this game will face No. 2 Lehman College on Tuesday afternoon at the National Tennis Center in Flushing Meadows.