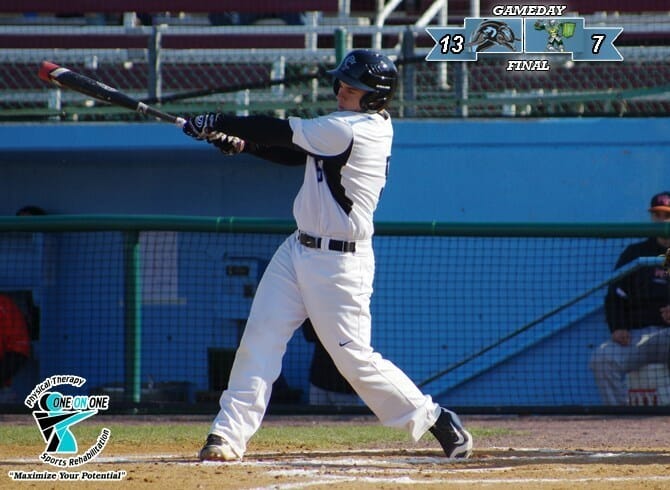 A little over a year past their record-breaking affair in 2015, the College of Staten Island baseball squad exacted a little bit of payback in 2016, handing New Jersey City University a 13-7 loss on its home field this afternoon as part of non-conference play in Jersey City.  The Dolphins advanced to 22-12 with the victory, while the Gothic Knights fell to 14-20.

Last year, the Knights handed the Dolphins a numbing 22-10 loss on a day when they set single game CSI opponent records with 30 hits and 11 doubles.  This time around the Dolphins got a big cushion early, held on, and then resurrected the advantage into the later innings holding on to victory.  The teams would combine for 30 hits on the afternoon and five combined errors would lead to a pair of unearned runs.

The Dolphins got on the board early, plating a run off of NJCU starter Anthony Zicaro.  Frank Sconzo and Nick Delprete led off the inning with back-to-back hits, and Sconzo would come in on a Frank Smith groundout later in the frame.  Later, after a sacrifice fly tied the score at 1-1 off of CSI starter Josh Bernstein, the Dolphins erupted for six runs in the game’s third inning.  Glenn Glennerster doubled in a pair of runs in the frame, and Frank Muzzio followed by also stroking an RBI double to open the lead to 6-1.  After plating another run, Zicaro was lifted, but not before the Dolphins had a commanding 7-1 edge.

NJCU had room for a comeback and they didn’t wait long.  In the fourth inning, the Knights would touch down five big runs, cutting the lead to a single digit.  Andrew Neich highlighted the assault with a two-run double and Zach Buchholz added a run scoring double later as well off of reliever Terrance Mulligan, who did manage to get out of the inning in place of Bernstein in the inning.

It was then time for CSI’s response and they tallied four runs in their next turn at the plate in the fifth inning.  Bobby Drake singled in a run, and then the Dolphins loaded up the bases.  That brought up Frank Smith with two outs, and the junior slapped a three-RBI double to open the lead to 11-6.

From there both teams settled threats on the mound, as the teams combined to leave 10 runners on base from the bottom of the fifth inning forward.  NJCU did cut the lead to 11-7 in the sixth, but consecutive runs by CSI in the seventh and eighth, highlighted by another Drake RBI-single, capped the scoring at 13-7.

CSI will next face off against Baruch College on Saturday, April 30, for a 12 Noon doubleheader at the CSI Baseball Complex.  CSI will be the visiting team on its home field against the Bearcats for a double that could end up determining the CUNYAC Regular Season Championship.