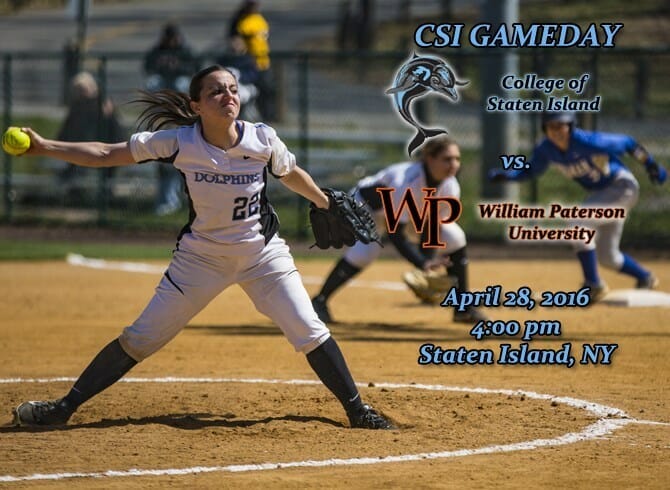 The College of Staten Island softball program is coming off of a busy week last week and are back in action once again for an afternoon doubleheader against William Paterson University at the CSI Softball Complex beginning at 4pm.  The Dolphins are 21-9 this season, sporting an exceptional 15-1 record on their home field as well.  The Pioneers are also humming, sporting a 27-7 overall record, having won five of their last six contests.

CSI vs. WILLIAM PATERSON UNIVERSITY AT-A-GLANCE
Matchup:  CSI (21-9 Overall, 11-1 CUNYAC) vs. William Paterson University (27-7 Overall, 9-5 NJAC)
Where:  CSI Softball Complex – 2800 Victory Blvd, Staten Island, NY
First Pitch: 4:00 pm
Live Video: www.csidolphins.com/csisportsnet
All-Time Series: WPU leads, 7-1
Last Year’s Result:   CSI won 9-1, WPU won 9-1
Players To Watch (CSI): The Dolphins are coming off a doubleheader sweep of Baruch on Sunday, powered by a strong outing from Jacqueline Cautela.  The junior now leads CSI with an 11-4 overall record in the circle and is up to a .406 batting average at the plate.  Cautela also leads the Dolphins with 20 extra bases, including 16 doubles.  Christina Tufano continues to lead CSI with a .411 batting average, she is now CSI’s career leader in hits (205), RBI (153) and doubles (44).  Vanessa Joia is also swinging a hot bat, now batting .394 on the season as well.
Players to Watch (WPU): A great deal of Pioneers offense is centered around Rachel Wasilak, as she is now batting .422 this season with a team-best 14 doubles and three homeruns.  Kaitlyn Poretti is batting a healthy .362 with Kim Fryer close behind at .361.  Allison Podmajersky is one of the nation’s best pitchers in the circle this season, yielding a 17-3 overall record with a tiny 1.56 ERA.
News and Notes: All eight of the previous meetings between these two squads have been since the 2010 season, and last year’s two meetings came in the 2015 NCAA Division III Regional held at Kean University.  CSI scored a 9-1 win in the opening game of the tournament, but the Pioneers returned the favor with a 9-1 win of their own soon after.  The win by the Dolphins was the first and only in the series, as the Pioneers had won the previous six games.  CSI is 0-4 all-time against WPU, as the Pioneers swept doubleheaders in 2010 and 2012.  CSI’s Tufano still has a couple of more CSI career records in sight.  She needs just a single triple to tie the all-time record of 19 held by Christina D’Arpa, and she’ll need 28 more at-bats to tie the record of 511 set just last year by Brittany Smith.  The Dolphins are ranked 7th in the nation in triples per game this season, and are 27th nationally in team batting average at .349.  WPU is ranked 11th nationally in fielding percentage, and pitcher Podmajersky is fourth in the nation with eight shutouts.