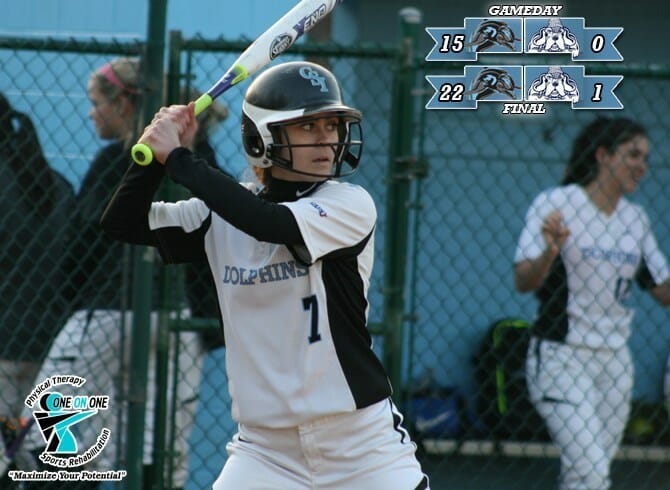 The College of Staten Island’s softball team returned to their winning ways today with a pair of wins over CUNYAC opponents John Jay College at 4:30 pm at the CSI Softball Complex.  After dropping three straight the Dolphins knew they had to make a statement and it just so happened that John Jay was next on the schedule and the Bloodhounds had to absorb the Dolphins’ frustration.  Staten Island would take game one 15-0 followed by a 22-1 rout in game two.  The pair of wins lifted the Dolphins to 14-8 overall and 7-1 in the CUNYAC while setting the Bloodhounds back to 5-14 overall and 4-6 in the CUNYAC.

The Dolphins wasted no time venting their frustration against the Bloodhound and tallied three runs in the opening stanza of today’s game.  Cautela would get things rolling for the Dolphins with a single to left field before moving over to second via a wild pitch.  The Dolphins’ most potent hitter this season, Chyanne Gilliam, stepped to the plate with bases loaded and battled at the plated hitting balls deep that would tail off foul at the last minute.  After battling Gilliam would hit a hard grounder to the second baseman who would throw her out at first but allow a run to score and give the Dolphins the go-ahead run.

Colangelo would bring home the remaining two runners on base when she ripped one through the left side for a two RBI single which gave the Dolphins a 3-0 lead after just one inning.

The second inning is one that the Bloodhounds will soon want to forget.  The Dolphins would capitalize on five errors committed by John Jay and score seven runs to put them up 10-0 over their conference opponents. It all began when Gianna DeCesare reached on a fielding error by Vanessa Rodriguez, one of three this inning, which put to runners on base for Staten Island. After that error by Rodriguez, John Jay’s confidence was shaken up and it translated into more errors which kept the inning alive for CSI. After the second inning came to a close and the dust settled Staten Island walked out of the inning with seven runs on just four hits while the Bloodhounds committed a total of five errors.

Over the course of the next two innings the Dolphins would add five more runs to their total for a final score of 15-0.  Cautela almost threw her second perfect game of the season but had that nullified when her team committed the only Dolphin error of the game which was immediately followed by a single through the right side.

Cautela would go the distance and allow just one hit with seven strikeouts to improve to 7-4 overall.

The Bloodhounds opened up scoring in game one after a sacrifice bunt by Amber Villegas moved Jennifer Pace into scoring position.  Lisa Pellegrino, the Bloodhounds’ top hitter, found her pitch and sent on off the left field way for an RBI double to give John Jay their only run of the doubleheader.

Staten Island would put an end to the Bloodhounds’ attempts to keep up with three-time CUNYAC Champion as Trapani would shut the Bloodhounds out for two more innings before giving way to Alexandra Conanan.

John Jay really struggled in the second inning of today’s games as in each game the Dolphins blew the game wide open.  Once again the Bloodhounds would commit five errors and give way to a 10-run inning for the Dolphins. Trapani was first to get on the bases with a double down the left field line.  Kristen Meagher would single to first and move to second via a wild pitch.  Cautela would step to the plate and hit a bases clearing double to left field.

Cautela wouldn’t have to wait long to be brought home as her teammate Antoinette Galbo single to center field.  The errors started to show up again which allowed the Dolphins to go through their rotation as the inning continued one.  After Trapani reached on a fielding error Meagher came to the dish for her second at bat of the inning and crushed one over the center field wall for her first homerun of the year. The second inning would come to a close shortly after and the Dolphins came away with 10 runs on seven hits and five errors.

After seeing their teammate hit a homerun the Dolphins zoned in and their confidence level rose even higher.  Colangelo came to the plate with Gilliam on base and took the first pitch she saw over the left field wall for her third homerun of the year.  Prior to that homerun, Colangelo and Trapani were tied at two homeruns each so to match her teammate Trapani stepped to the plate two batters later and hit a three RBI homer directly over the center field wall.  CSI would go on to score six runs in the third inning and extend their lead to 18-1 over John Jay.

In the fourth the Dolphins would add four more runs to their total before closing out the game and giving Trapani her seventh win of the season.  The Dolphins remain perfect at home with the pair of wins and move to 8-0 at the CSI Softball Complex this season.

The Dolphins will return to action on Thursday, April 21 where they will take on Mt. St. Vincent at 5:00 pm at the CSI Softball complex in what will be the first doubleheader of four over the course of the next four days.