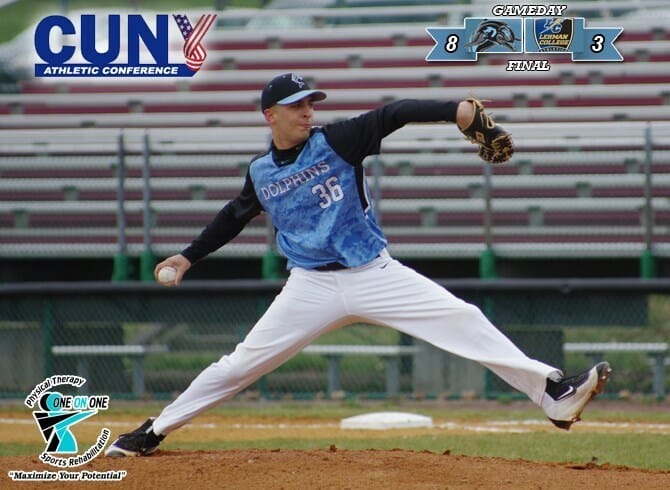 The College of Staten Island men’s baseball team started the defense of their CUNYAC Championship in successful fashion tonight, scoring an 8-3 win over visiting Lehman College as part of the double-elimination format of the tournament at the CSI Baseball Complex.  As the top seed in the Tournament, CSI waited while No. 5 Lehman disposed of No. 5 University of Maine – Presque Isle, 8-2, as part of single-elimination play, setting up the evening’s contest.  With the win, CSI advanced to 24-13 overall, and moved on to the Winner’s Bracket final tomorrow afternoon against No. 2 Baruch College at 4pm. Lehman (9-27) will face No. 3 John Jay College tomorrow at 1pm in a Loser’s Bracket elimination game at 1pm.  Those games will be played at CSI tomorrow, weather permitting.

Hits were at a premium all evening for the squads tonight, as the teams used walks, wild pitches, passed balls and errors to help guide play, as the teams totaled just 9 hits between them.  CSI gave the ball to freshman hurler Tom Musso, while Lehman countered with Jose Albirincole.  After Musso retired the Lightning in the first, Albirincole was able to register an out, but after a lengthy delay due to an injury, Albirincole was forced to leave the game, giving way to Emanuel Castro.

The Lehman right-hander was able to retire the Dolphins, but after the Lightning went quietly in the top of the second inning, CSI pounced in their turn of the second.  Glenn Glennerster earned a walk to start things off, and then George Kantzian followed by towering a shot to left field that cleared the CSI outfield wall by a long way, giving CSI the 2-0 lead.  After registering an out, Castro walked CSI’s Anthony Dimarco and Phil Ciprello, and two batters later, Nick Delprete got a free pass to load the bases. That chased Castro from the mound in favor of Richard Villar, but Joe Palmeri then followed, and boomed a lined shot to right-center field that made it to the warning track.  Palmeri was caught trying to leg the double into a triple, but by then the damage was done and CSI ended the inning with five runs on just two hits, taking a 5-0 lead.

That proved to be as much run support as Musso would need on the hill, although Lehman punched right back with three runs in the third inning, helped along by two CSI fielding errors.  Rafael Delgadillo reached first base via an error, as did Anthony Careccia.  Steve Cuello followed with an RBI double, and after registering an out, LC added another run on a Musso wild pitch.  Nataneal Toribio followed with a stroke to left field for another RBI to make it 5-3 before Musso wiggled out of the jam by inducing a double play on the next at-bat, part of three on the day for the Dolphins.

From there the bats fell relatively silent and both pitchers motored through the innings relative unscathed.  Lehman put just three runners on base through the eighth inning against Musso, and the Dolphins registered only a single hit from innings three through seven.  In the eighth inning, however, CSI once again caught fire.  Palmeri started it with a single, and after advancing on a wild pitch, Frank Smith was walked and the pair then advanced a base via sacrifice.  After Kantzian was walked to load the bases with one out, Palmeri came in to score on another wild pitch.  Villar was able to induce an out, but then Dimarco followed by smoking a two-RBI single into right field, making it 8-3 on their fifth hit of the evening.

Fueled by the offensive lift, Musso went out in the 9th and took the Lightning down in order to earn the complete game win, his fifth of the season.  He allowed just a single earned run on four hits, fanning 12, a season-high.  Castro took the loss for Lehman, going only 1.1 innings in relief.  Palmeri scored the only multi-hit game for either squad, going 2-3 with three RBI and a run scored.

CSI will now set up to play No. 2 Baruch College, a 14-1 winner in their opener against John Jay, opening up the game with an 11-run eighth inning.  That game will be played at 4:00pm at CSI, as will John Jay’s game with Lehman at 1pm.  The tournament will continue from there with a 7:00pm game followed by the Championship Game(s) on Saturday.  Of course, Mother Nature is threatening the contests and decisions on tomorrow’s games should be made by 8:00am tomorrow.