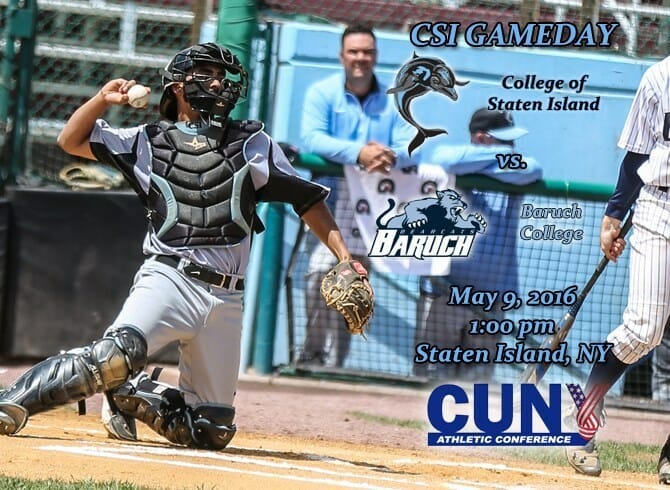 The College of Staten Island baseball team will be looking for a CUNYAC Championship repeat, and to do so they will have to defeat a familiar opponent in Baruch College.  Game time is set for 1:00pm at the CSI Baseball Complex.  CSI needs to beat the Bearcats once, while the Bearcats would have to beat the Dolphins twice to win the championship.  These two teams faced off yesterday, with CSI taking a thrilling 10-9 win in 10 innings.

#1 CSI vs. #2 BARUCH AT-A-GLANCE
Matchup:  CSI (25-13 Overall, 7-1 CUNYAC) vs. Baruch (14-17, 6-2 CUNYAC)
Where:  CSI Baseball Complex – 2800 Victory Boulevard, Staten Island, NY
First Pitch: 1:00 pm
Live Statistics:  http://www.sidearmstats.com/cuny/baseball/
Live Video:  http://cunyathletics.com/watch/?Live=43
All-Time Series: CSI leads Baruch 79-20
This Year’s Result:   CSI has won two of three meetings
Players to Watch (CSI):  Glenn Glennerster went an astounding 4-4 in yesterday’s win over the Bearcats, improving his batting average to .333, good for third on the squad.  Frank Smith’s RBI hit was the game-winner yesterday.  He is now batting .264 this season.  The Dolphins are still paced by Nick Delprete’s .383 average.  He added three hits yesterday.  Ryan Kennedy is 4-5 this season with a 5.02 ERA and could make the start if the normal CSI rotation holds true.
Players to Watch (BC): Edwin St. Hilaire stroked four hits and two RBI in yesterday’s match with CSI, lifting his season average to .247.  Jasdeep Buttar still paces Baruch with a .358 average, followed by Luca Altamirano’s .336 mark.  Bryan Flannery may earn the start today for Baruch.  He is 1-3 this season with a 6.84 ERA.
News and Notes: The Dolphins are appearing in their fifth CUNYAC Championship in the past six years and are 5-4 since 2010 in Championship games.  They are 22-10 overall in the Championship and are 15-8 all-time against Baruch College in the Tournament.  Last year, CSI won the Championship in a thrilling, 10-9, win in 12 innings.  A game where CSI scored four runs in the bottom of the 9th to tie.  Just yesterday, CSI used five runs in the bottom of the ninth to tie the game at 9 before winning an inning later by the same score.  The two teams combined for 28 hits yesterday, but left 19 players on base in the 9 innings.  CSI’s first five players in the lineup yesterday batted .440 in yesterday’s game against Baruch, while the bottom half batted .133.  CSI will look to even that better this afternoon.  Baruch will need to beat CSI twice to secure the championship.