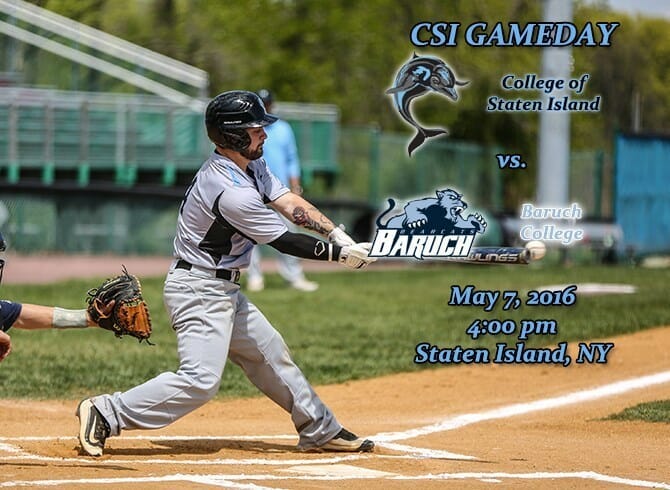 The College of Staten Island baseball team will take on second seeded Baruch College today in the second game of the day.  This game will be a rematch of last year’s final which saw the Dolphins make an improbable comeback with a walk off grand slam to win the CUNYAC Championship. Game one will start at 1:00 pm and feature No. 3 John Jay and No. 5 Lehman College in an elimination game as each team picked up a loss on Thursday.

#1 CSI vs. #2 BARUCH AT-A-GLANCE
Matchup:  CSI (24-13 Overall, 7-1 CUNYAC) vs. Baruch (13-16, 6-2 CUNYAC)
Where:  CSI Baseball Complex – 2800 Victory Boulevard, Staten Island, NY
First Pitch: 4:00 pm
All-Time Series: CSI leads Baruch 78-20
Last Year’s Result:   CSI won four of five meetings including the CUNYAC Championship game.
Players to Watch (CSI):  Joe Palmeri has had an outstanding season at the dish and it showed in the first game of the CUNYAC Tournament as he went 2-for-3 with three RBIs and a run to help his team secure an 8-3 victory over the Lightning.  George Kantzian, the hero of last year’s final, once again put his power on display as he hit a home run over the left field wall to bring in two runs for the Dolphins.
Players to Watch (BC): Jasdeep Buttar is the Bearcats’ best hitter and led his team to a 14-1 win over the Bloodhounds.  Buttar went 3-for-6 in that game and collected three RBIs. Buttar is batting .375 on the year with one home run and 24 RBIs. Luca Altamirano also had a good game going 3-for-5 with three RBIs and a run in the rout of John Jay.
News and Notes: The Dolphins and Bearcats split this season when the regular season title was on the line.  The Dolphins went into their final CUNYAC split of the season a perfect 6-0 only to see their undefeated hopes crushed after they fell to Baruch 5-4.  Staten Island rebounded nicely in the second game and was able to earn the regular season title with a 7-1 victory.  CSI has won three of the last five meeting between these two squads and will hope to increase that lead and pick up their second consecutive CUNYAC title.