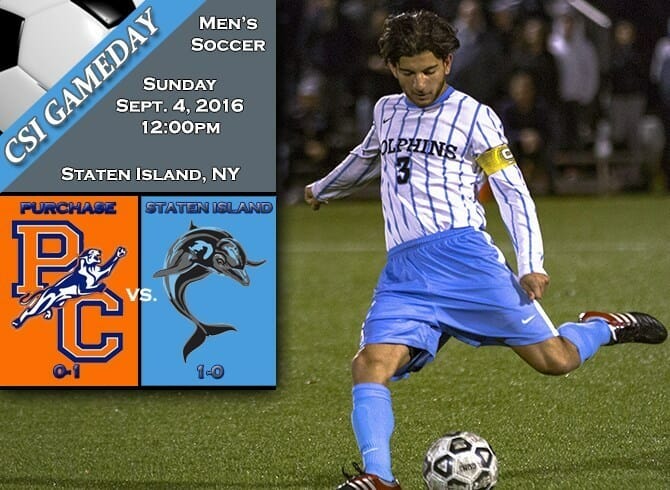 The College of Staten Island men’s soccer squad will be debuting on their home field today, taking on Purchase State College at the CSI Soccer Complex at 12 Noon.  The game is part of the CSI Kickoff Classic, which opened yesterday with a 3-0 win by New Jersey City University over Purchase.  At 2pm this afternoon NJCU will play Yeshiva University, so today’s CSI game is part of a men’s soccer doubleheader.

CSI vs. PURCHASE STATE COLLEGE AT-A-GLANCE
Matchup:  CSI (1-0 overall, 0-0 CUNYAC) vs. Purchase State College (0-1 Overall, 0-0 Skyline)
Where: CSI Soccer Complex, 2800 Victory Blvd., Staten Island, NY
Kick-Off: 12:00pm
Live Video (weather permitting):  http://www.csidolphins.com/CSISportsNet
Live Stats:  http://www.sidearmstats.com/csi/msoc
All-Time Series:  Series tied, 3-3-1
Last Year’s Result:  Purchase won, 2-1
Players To Watch (CSI):  After a two-year hiatus from soccer, sophomore Ali Fares scored the Dolphins’ first goal of the season and the first goal of his career in a 1-0 win on Thursday over Farmingdale State.  Look for him to want to continue the hot start today against Purchase.  Freshman keeper Jake Foeldes made four saves in his collegiate debut, posting a 103 minute shutout.  Junior transfer Adrian Cosovic paced the Dolphins with five shots in the opener.  Look for him to be busy in front of the net today as well.
Players To Watch (PC): Seniors Dylan Hyman, Connor Leavens, and Matthew Ebel all played valuable minutes yesterday against NJCU and the three captains promise to be busy again today at the top and back line.  Starting keeper Thomas Ogrodnik was red-carded in yesterday’s match and will miss the match today.  That will put the onus on freshman Jade Aubertin, who made two saves in his PC debut yesterday in the second half, yielding a single goal.  Sophomores Ramsey Heitmann and Yianni Amvrosiatos had many touches for the Panthers as well and figure to be involved offensively.
News and Notes: Despite the all-time series tie, the better of play has recently belonged to the visiting Panthers, who have won three of the last four in the series.  CSI did however win the last matchup on their home turf, a 2-0 decision in 2014.  CSI is 2-1 all-time at home against the Panthers.  This is the third straight year that the teams are facing off.  CSI outshot Farmingdale in their season opener, 18-10, while Purchase was outshot by NJCU in theirs, 28-6.  They will need to try and slow down the CSI attack today, while the Dolphins will look to attack the rather young and inexperienced PC lineup.  Both teams start freshman goalkeepers today.  In last year’s meeting, PC senior Matthew Ebel scored the opening goal, and the Panthers held on for a 2-1 win despite being out-shot, 20-9.  CSI injured sophomore Philip Lefkowitz led the CSI attack that day with six shots, four of them on goal.  CSI senior Ruben Diaz scored his first career goal at CSI two years ago against Purchase, in a 2-0 CSI win.