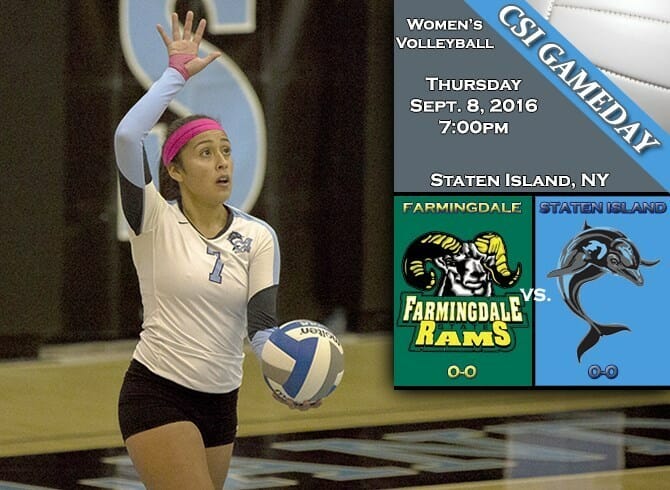 The final CSI fall sports team to get its season started is women’s volleyball, and the team will roll things out this evening, when it tackles Farmingdale State College at 7pm at the Sports & Recreation Center.  Optimism surrounds the unit, as the Dolphins will be led by full time Head Coach Jason Madsen, and features a lineup brimming with potential.

CSI vs. FARMINGDALE STATE COLLEGE AT-A-GLANCE
Matchup:  College of Staten Island (0-0 Overall, 0-0 CUNYAC) vs. Farmingdale State College (0-0 Overall, 0-0 Skyline)
Where:  CSI Sports & Recreation Center – 2800 Victory Boulevard, Staten Island, NY
First Serve: 7:00 pm
Live Video:  http://www.csidolphins.com/CSISportsNet
Live Statistics: http://www.sidearmstats.com/csi/wvball
All-Time Series:  Farmingdale leads, 6-0
Last Year’s Result:  Did Not Play
Players to Watch (CSI): The Dolphins will be leaning on their returning faces to carry them to prosperity in 2016.  Seniors Victoria Wong and Siobhan Granich will be tasked to be anchors at the front and back of the lines, while returning standouts Vanessa Reyes and Skenderjie Mila will see extended play now entering their third and second years, respectively.  Newcomer Cassidy Iannariello is a sophomore transfer from CCNY who adds quality setting to the mix.
Players to Watch (FSC):   David Mayerson is making his coaching debut for Farmingdale State tonight and the Rams feature four seniors who they expect big dividends from in 2016.  Kenia Peralta, Barbara Wright, Katie DeGraff, and Christina Hickey could all see valuable time on the hardwood this season as the team looks to build off of a solid campaign in 2015 where they recorded 13 wins.
News and Notes: After an eight year layoff, CSI and FSC renewed this rivalry in 2014.  Previous to that meeting the two teams met every year from 2001 to 2006.  This is only the third meeting between the teams at the Sports & Recreation Center and the first since 2003.  Farmingdale has never dropped a set against CSI…Farmingdale finished 13-14 a year ago, they went 5-1 against CUNYAC opponents last year, including a win against Lehman College.  CSI finished 8-16 overall a year ago.  Since 2001, CSI is just 1-13 in season openers.  Farmingdale has won five of their last six season openers.