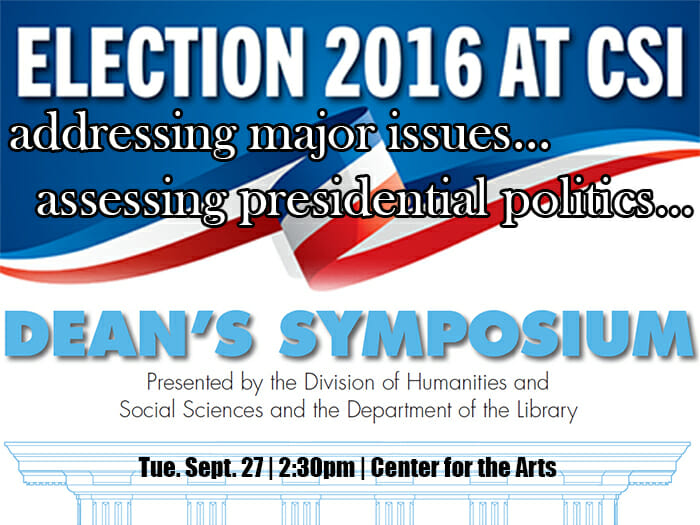 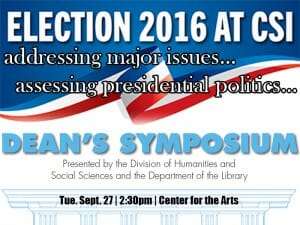 With Election Day just around the corner, Professor Richard Flanagan from the Department of Political Science and Global Affairs, Associate Professor Lee Papa of the Department of English, and Assistant Professor Reece Peck from Media Culture will address issues facing U.S. voters and put today’s political landscape into a longer historical perspective.

The Symposium, presented by the Division of Humanities and Social Sciences, will feature the panel of three faculty members on Tuesday, September 27 from 2:30pm to 4:00pm in the Center for the Arts Williamson Theatre discussing the major issues facing U.S. voters and assessing the current state of presidential politics.

“Never before have voters disliked the presidential nominees so intensely. How did this happen? Is it a problem? These are some of the questions the panel will tangle with,” noted Professor Flanagan, adding that there are also unique elements of this campaign season, including the full use of social media like Twitter and Facebook, the decline in paid advertising as a campaign tool and strategy, and the unique role of cable news as a conveyor of information to the segment of voting public that pays close attention to elections.

“An angry, populist message from the left and right dominates the campaign season, no doubt a continued hangover from the Great Recession of 2008-2009 and the wars in Afghanistan and Iraq,” Professor Flanagan said.

To balance the discussion, Professor Papa will discuss the role of social media in the campaign as well as his own experiences as a prominent political blogger; drawing from his research on the Fox News Channel, Professor Peck will talk about how social identity politics drive the rhythm of presidential politics in the modern age; and finally, Professor Flanagan will discuss how the shadow of Richard Nixon has fallen across candidates Hillary Clinton and Donald Trump in the final days of the campaign.

A reception will follow. This is a CLUE event.