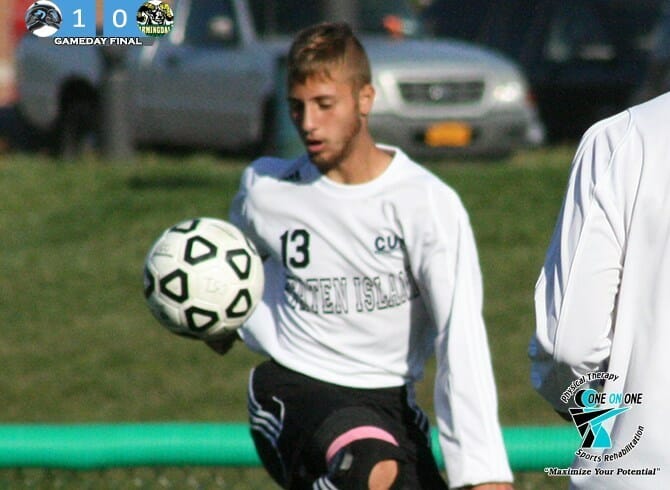 A double-overtime goal by CSI sophomore Ali Fares was the difference, as the College of Staten Island was able to post a 1-0 win over Farmingdale State College in the first meeting of the season for both teams earlier this afternoon in Farmingdale, NY.  The win lifted the Dolphins to 1-0 overall, marking their first opening day win since 2012, while the home Rams fell to 0-1.  The goal for Fares, a midfielder playing in his first game since 2013, was the first of his career.

Opening day of the season was marred by poor weather, and just seven minutes into the game, play was suspended fort half of an hour due to lightning in the Farmingdale area.  By then, little offense was to be had, and the chances would remain few and far between for the remainder of the first half, which picked up at approximately 5:00 pm.  The Dolphins peppered the Rams net with six shots in the frame, forcing FSC keeper Jeff Valencia into four first half saves.  Freshman keeper Jake Foeldes for CSI made a lone save for CSI in the game’s 30th minute, turning back a shot by Alex Gimadiev.

CSI controlled much of the tempo in the first stanza, and looked to continue the trend in the second half, to the tune of another 9 shots, with four more landing on net.  Vasyl Fedortsi had the opening shot of the stanza that Valencia turned back, but CSI’s best chance came with just over 30 minutes to play, when freshman Xavier Castro pasted a shot off of the crossbar, a ball that could have very easily put CSI up, 1-0.

With precious minutes left, it was FSC that nearly sealed things when a Gimadiev shot was turned back by Foeldes with just six minutes left, and Foeldes quickly regrouped to save a John Kender follow-up header.  Still, the game dripped into overtime with the score knotted at 0-0, and overtime loomed.

There, the Dolphins looked again for steady possession, but were only able to muster one shot in the frame, and Adrian Cosovic header that was blocked away.  The FSC attack was held in check by the Dolphins, but the Rams started the second overtime with two quick parries, the second of which was saved by Foeldes, part of four on the day for the freshman.

Three minutes into the second overtime, CSI was awarded a free kick after an FSC foul, and senior Nermin Kurtesi did the honors.  The midfielder skipped one into the box that forced Valencia into a sprawling save.  Despite the effort, the ball landed at the foot of Fares, who popped in the shot from close range to give CSI the 1-0 win 103 minutes into the game.  Fares, who missed the entire 2014 and 2015 seasons, was mobbed by teammates, and the goal was the first of his career after tallying 8 assists his freshman year in 2003.

The Dolphins finished with an 18-10 edge in shots (10-4 on goal) and the team held a 5-3 edge in corner kicks.  With the weather-related break, the official time of the game lasted just under three hours.  Foeldes made four saves for his first career win, while Valencia made 9 save sin the losing effort.

Up next for the Dolphins will be the CSI Fall Classic played this weekend.  The Dolphins will open up their play of Sunday against Purchase State College at 12pm.  Purchase plays New Jersey City University on Saturday at 12 Noon to open the Classic.  Live video of CSI’s game will be available here.