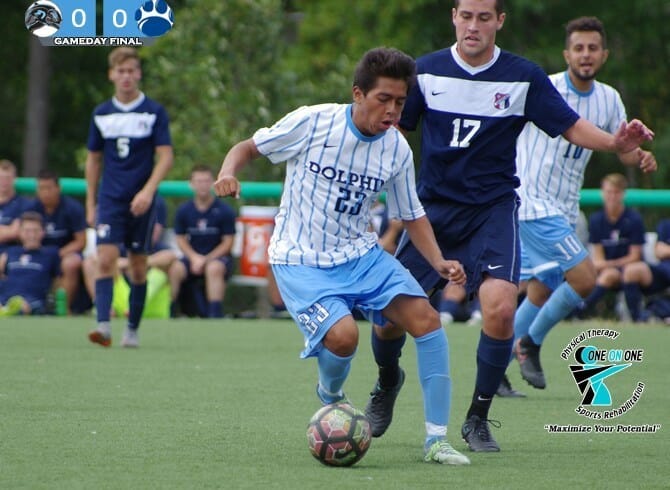 The College of Staten Island men’s soccer team took on the Penn State – Behrend Lions at the CSI Soccer Complex and played out to a 0-0 draw.  The Dolphins didn’t play their best game but the tie moves them to 3-1-1 overall while moving the Lions to 2-1-2 on the year.

The Dolphins opened the game rushing their play and allowing Penn State to dictate the pace of the game.  CSI would eventually settle in and see their fair share of chances in the first half after using combination plays to find their way through the Lions’ defensive line but were unable to find the back of the net. Ilir Papraniku has saved the Dolphins a few times this year and they would need him twice today. Papraniku cleared one off of the goal like in the 15th minute of the first half and that would not be the only time he was needed today.
CSI would rifle off seven shots in the first half and allow just three for the Lions.  Staten Island would also edge Penn State out on corners 4-2 in the first.

The second half saw more opportunities for both teams and freshman goalie Jake Foeldes was called upon several times and came up big.  In the 53rd minute the Dolphins’ back line would allow Anthony Crivelli to get behind them and get a wide open shot with just Foeldes to beat.  Foeldes would make an incredible save but he was not done as the blocked shot parried right back to Crivelli who had his shot once again blocked by an outstretched Foeldes.

Nermin Kurtesi would have a chance to win it for the Dolphins in the 90th minute with a 25 yard free kick that would sail just inches above the crossbar.

In the second overtime Foeldes would continue to make save after save to keep his team alive, however he nearly got beat in the 107th minute on a breakaway that was chipped over his outstretched arm but Papraniku was there to save the day once again.  With the ball inches away from crossing the line and ending the game Papraniku cleared it off of the line again.

CSI would have a chance with seven seconds left but the shot would be send over the bar, ending the game in a 0-0 tie.

The Dolphins will return to action on Wednesday, September 14 where they will head to Jersey City, NJ to take on New Jersey City University at 3:00 PM.